Flying in the Year 2052: Fast, Cushy, and Efficient

No more drudgery and delays: In 40 years, airplanes will offer panoramic views and silky flights, while airports will become seamless centers of commerce and entertainment. 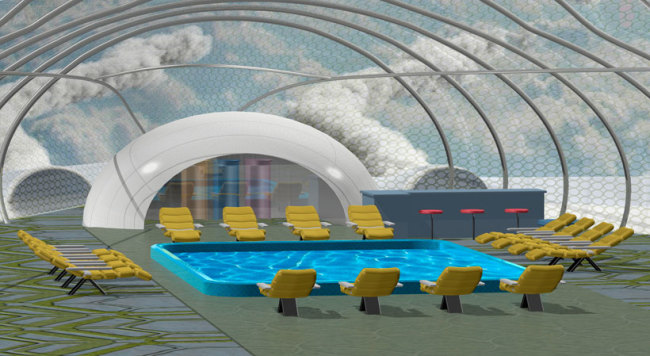 In its early days, air travel was glamorous. Decades of progress since then have made it safer and cheaper--but also grimmer and far more frustrating. These days the flight experience generally means hunching in a narrow seat, nibbling on a bag of pretzels, and straining to glimpse the sky through a tiny porthole.

What technology has taken away, another round of advancements could restore. By 2052, 40 years from now, a new generation of aircraft could immerse passengers in panoramic views of the clouds. In their imagining of future flight, designers have envisioned fitness centers, theaters, even swimming pools aboard planes. Airbus suggests that by 2050, the biggest planes might resemble cruise ships, with swimming pools, virtual golf, and casinos. For working passengers, the plane will incorporate video and data links to the outside world. 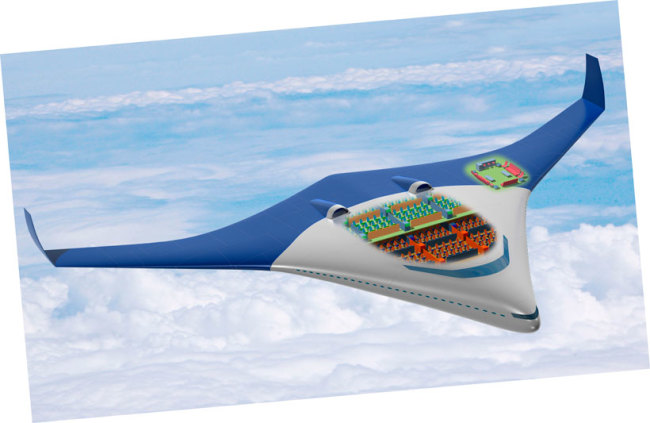 This future vision of air travel may feel like mere fantasy. But with today's 3 billion passengers a year expected to quintuple by 2052, the only option is rethinking air travel from the ground up. One visionary is Ruben Del Rosario, manager of the NASA Subsonic Fixed Wing Project. His team is exploring aircraft that blend wings and body into a single, unbroken structure that reduces aerodynamic drag, cutting fuel costs and emissions. Crucially, the expanded body would allow the cabin to be less like a tube and more like an amphitheater, Del Rosario says. Boeing's unmanned three-engine X-48B resembles a manta ray with a 20-foot wingspan. The first phase of testing was completed in 2010.

To meet Defense Department goals for decreasing drag, Airbus suggests partially embedded engines into the main vehicle body. The engines would be built into the the top of the plane near the rear to shield people on the ground from noise.

Computerized planes would largely fly themselves; pilots could oversee matters using spoken commands and touch screens, enabling them to absorb and respond to information more rapidly than if they had to flip switches or hit keys.

As the plane moves toward new, more efficient shapes, the surface of the craft itself could become more aerodynamic. A material comparable to sharkskin--an outer casing made of plastic, shaped with microscopic grooves--could repel dirt and reducing air friction up to 5 percent. (Strange but true: Bug carcasses appreciably add to aerodynamic drag.) Airbus, the European aircraft manufacturer, suggests that by midcentury aircraft skin could alternate between transparent and opaque, somewhat like today's light-sensitive eyeglasses, giving passengers a wide-angle view of the clouds.

The surfaces of planes may achieve further efficiency gains by dynamically adapting to each situation. "You might have a morphing wing," says David Hills, an aerodynamicist at Airbus. "When a bird hovers, it makes microchanges to capture every last degree of performance from the conditions it's experiencing. That's where we need to go." Instead of slats and flaps, wings could be covered with sensors and small moving plates, allowing them to change shape during flight and counteract turbulence. Airbus may embed small, instantly responsive air jets to improve aerodynamics. Doing so would let airlines fly more people while burning less fuel. 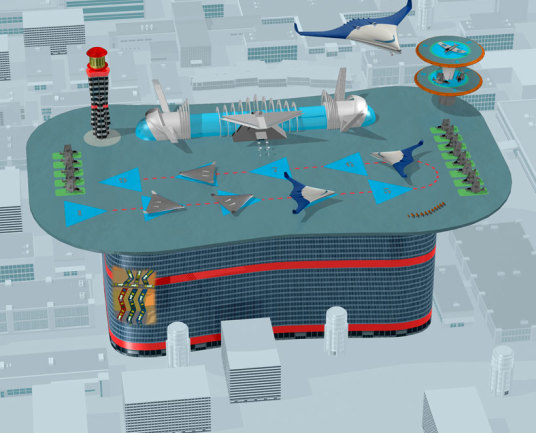 Today's challenges extend beyond the plane itself. Inconvenient airports, security lines, and delayed takeoffs obliterate the speed advantages of flying. No surprise, then, that for trips under 250 miles, air travel has declined some 45 percent since 2000. Customers have been reduced to clamoring for an Airline Passenger Bill of Rights that mandates potable water, ventilation, and working toilets during grounded flights. But engineers and planners are conceiving more dramatic fixes. Airports of 2052 could emphasize relaxation and play, with minimal waiting and few checkpoints.

As the global movement of people and products grows, the airport of 2052 would take on the role of self-contained urban center. Pointing the way is South Korea's sprawling new Inchon Airport, which has its own casino, spa, and 72-hole golf course. The designer of Inchon's main terminal, Curtis Fentress, notes that for years airport design was mostly just "decorating the hangar." He foresees a time when quieter planes, possibly designed to take off and land vertically, will allow airports to sprout in traditional downtowns; this whimsical image shows some of the features suggested by Stanford University engineers and Fentress Architects. "What was grand about historical train stations is that they symbolically said, 'Welcome!' " Fentress notes. An airport should do the same.

Improvements to airports won't just make airports more pleasant but also more efficient. Terminal gates may be closer together, like train station platforms, eliminating long hikes for passengers. To make this possible, Boeing has looked to the design of aircraft carrier jets in hopes of building planes with fold-up wings. And Siemens is testing high-speed luggage conveyors that zip from floor to floor, shortening connection times and bringing bags to passengers upon arrival. GPS-enabled ID tags will let people track their luggage.

Once air traffic control finally dumps radar for GPS (a long-overdue change), planes in flight would no longer have to stay miles apart. Precise positioning would let pilots customize flight routes according to conditions, instead of joining airborne queues or circling ad nauseam.

To ease the tedious check-in process on the ground, Siemens AG, the German technology giant, has begun testing face-recognition software so passengers do not have to show photo IDs in long lines. By 2020, scanners, sensors, and sniffers in stroll-through security corridors will check your bona fides quickly and nearly invisibly while you pass, predicts Kenneth Dunlap, director of global security for the International Air Transport Association.

You could saunter out of a karaoke bar (or whatever they have in 2052) and straight onto your plane. 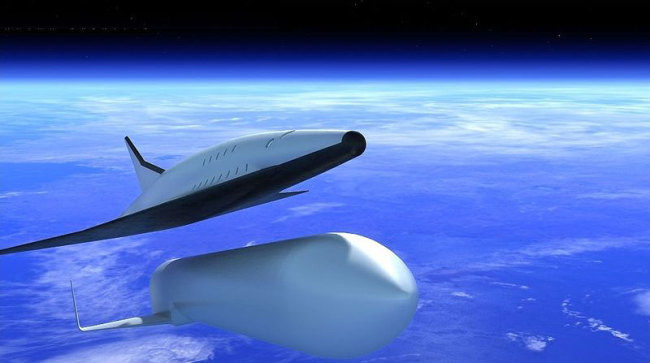 For the wealthiest passengers--the ones who pioneered air travel in the first place--the aviation industry is researching high-speed civilian aircraft, which could be flying by 2030. These would cater to the free-spending uber-CEO as well as the adventure seeker, who might spend six figures for a ride.

The SpaceLiner, a hydrogen-powered rocket plane conceived by the German Space Agency, could someday carry up to 50 passengers through the upper atmosphere. Brussels to Sydney? A 90-minute hop. Virgin Galactic and others are proposing similar suborbital flights. Only the 10-minute launch would be powered. "The other 80 minutes is gliding, atmospheric flight," says Martin Sippel, the SpaceLiner's chief investigator. Top speed: Mach 20, nearly 24 times the cruising speed of a Boeing 787. 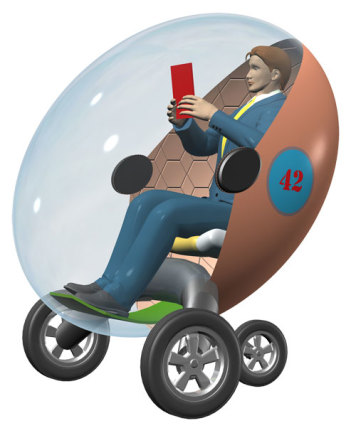 Passengers on the same connecting flight could be seated together in wheeled, ergonomically designed "pods" at the departure gate. Pods scheduled for the same destination would automatically travel in groups to connecting flights.

D. C. Stewart is a Massachusetts-based freelance writer whose work has appeared in Air & Space and other magazines. 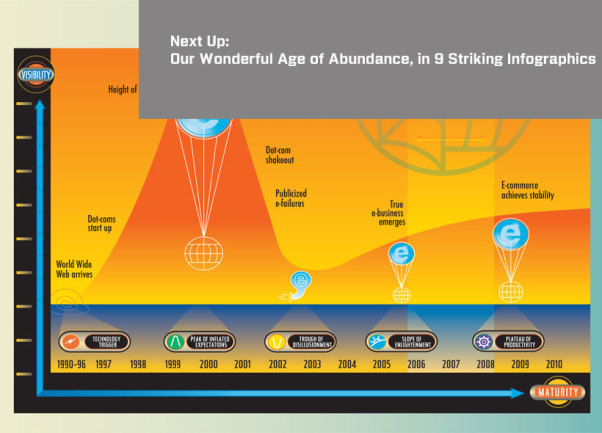