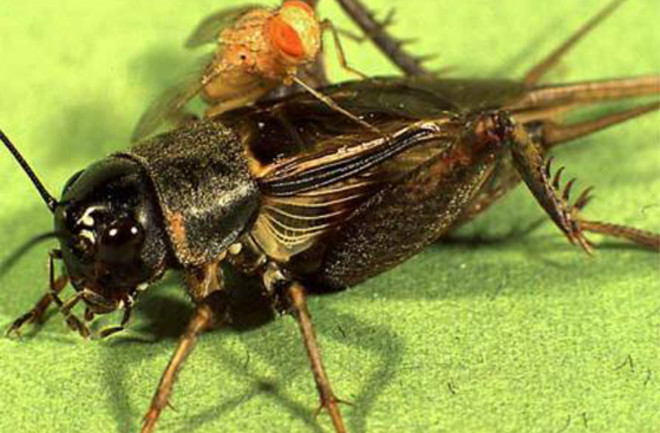 Imagine a world where a fly on the wall could help Grandpa Joe and James Bond. In July, researchers announced that one fly’s hypersensitive ears had inspired a cutting-edge hearing device.

Ormia ochracea, a parasitic fly species, needs extremely accurate directional hearing to target its prey: crickets. But the fly’s ears are just half a millimeter apart — too close together to pinpoint a chirping cricket, which emits sound waves on a much larger scale, without some extra help. So O. ochracea relies on a seesaw-shaped mechanism to amplify the difference between what each ear hears.

Researchers re-created the fly’s unique mechanism by constructing a 2-millimeter rectangular silicon device with a fulcrumlike pivot supporting a tiny beam, similar to a seesaw. Pressure from sound waves flexes and rotates the beam to create an electric signal that’s processed to determine sound direction — the same way O. ochracea does.

“We believe the optimized version will perform better than any commercially available microphones using the same spacing,” says study author Michael Kuntzman, who conducted the research at the University of Texas at Austin.

The device could help the elderly hear all the gossip at a dinner party or, with the funding the project got from the U.S. military, let spies hear secrets that could save lives. Kuntzman said the next step is to design a device that’s durable enough for the rigors of everyday use.

[This article originally appeared in print as "Insect Lends Us Its Ears."]