Flashback Friday: Ever wonder why bars get so loud? 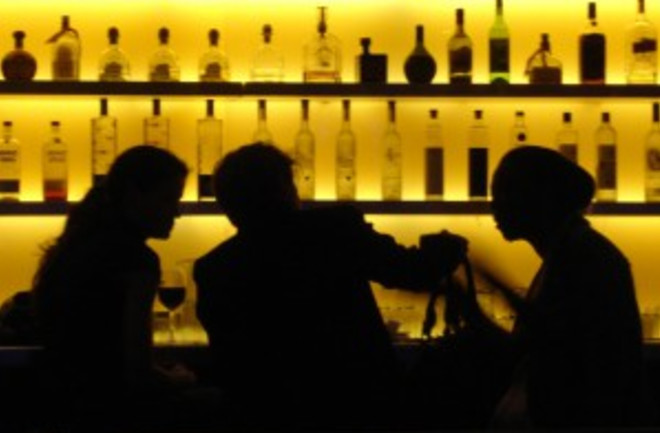 Image: flickr/Glenn HarperHave you ever wondered why bars and parties tend to get louder and louder as the evening progresses? Is it just alcohol-fueled enthusiasm, or is there a physiological explanation? Perhaps drunk people just need to be yelled at? To test the latter idea, scientists tested participants' hearing before and after getting drunk. And lo and behold, the results showed that consuming alcohol not only blunts the pain of a broken heart, it also deadens one's hearing. The authors go on to suggest that some patients who complain of "cocktail party deafness" may just have had too many cocktails, and they don't actually have a permanent hearing deficit. That sounds like a reason to celebrate--next round's on me!The acute effects of alcohol on auditory thresholds. “BACKGROUND: There is very little knowledge about alcohol-induced hearing loss. Alcohol consumption and tolerance to loud noise is a well observed phenomenon as seen in the Western world where parties get noisier by the hour as the evening matures. This leads to increase in the referrals to the “hearing aid clinic” and the diagnosis of “cocktail party deafness” which may not necessarily be only due to presbyacusis or noise-induced hearing loss. METHODS: 30 healthy volunteers were recruited for this trial which took place in a controlled acoustic environment. Each of the individuals was required to consume a pre-set amount of alcohol and the hearing was tested (using full pure tone audiogram) pre- and post- alcohol consumption over a broad range of 6 frequencies. Volunteers who achieve a minimum breath alcohol threshold level of 30 u/l had to have second audiogram testing. All the volunteers underwent timed psychometric and visuo-spatial skills tests to detect the effect of alcohol on the decision-making and psychomotor co-ordination. RESULTS: Our results showed that there was a positive association between increasing breath alcohol concentration and the magnitude of the increase in hearing threshold for most hearing frequencies. This was calculated by using the Pearson Regression Coefficient Ratio which was up to 0.6 for hearing at 1000 Hz. Over 90% of subjects had raised auditory thresholds in three or more frequencies; this was more marked in the lower frequencies. CONCLUSION: Alcohol specifically blunts lower frequencies affecting the mostly 1000 Hz, which is the most crucial frequency for speech discrimination. In conclusion alcohol does appear to affect auditory thresholds with some frequencies being more affected than others.” Related content: Discoblog: NCBI ROFL: Anticipated versus actual alcohol consumption during 21st birthday celebrations. Discoblog: NCBI ROFL: Beer Consumption Increases Human Attractiveness to Malaria Mosquitoes. Discoblog: NCBI ROFL: St. Paddy’s Day special: Surprise! Drinking makes the Irish more aggressive!