First iPhone App to Feature in a Film Festival 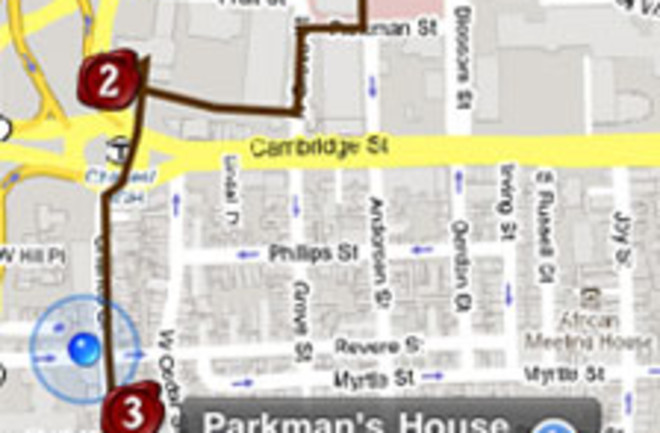 With the scourge of Internet addiction growing ever more fearsome, a Boston-based company has designed a clever way to entice such addicts to once again join the outside world. The trick is allowing them to keep their eyes firmly glued to the screens of their iPhones. The company's app, called Walking Cinema: Murder on Beacon Hill, is built for a walking tour of that old neighborhood in Boston, kind of like a museum audio tour. But instead of hearing someone drone on drily about the various numbered stops, you follow the map and watch the place's history unfold in a series of videos corresponding to their locations. The app has been so well-received that its videos are going to be screened on April 18th at the Boston International Film Festival--the first-ever app to make it to a film festival. This particular app tells the story of the Parkman murder, in which wealthy Bostonian George Parkman is killed and his dismembered body is discovered under a dissecting vault at Harvard Medical School. Harvard instructor John Webster, who owed Parkman money, was convicted of the murder after a sensational trial and publicly hanged. The app, with its tightly produced videos tells the story of the Parkman murder and, according to the creators, is a "page-turner mystery powered by your feet." Xconomy writes:

Normally, viewers experience the story of the murder as they travel a mapped route around Boston’s Beacon Hill, watching sections from the video at eight different stops. At the film festival, though, audiences will stay firmly in their seats, watching all 33 parts of the video in continuous order. “We were just blown away at how watchable the story is in a theatrical setting,” BIFF director Patrick Jerome said in a statement. “It’s quick-paced, full of juicy details, and, to our knowledge, it’s the first location-based application to screen at a film festival.”

The creators hope that this new app, with its high-quality videos will set the pace for development of other apps that can be used for enhanced walking and audio tours. The company is one of the many startups that is focusing on "mobile documentaries" and the creation of software that will force its users to look outward and learn about the world around them. Related Content: Discoblog: Weird iPhone Apps, a compendium Image: Walking Cinema