By mimicking the design of a firefly's light-emitting organ, researchers built an LED that shines 55 percent brighter. 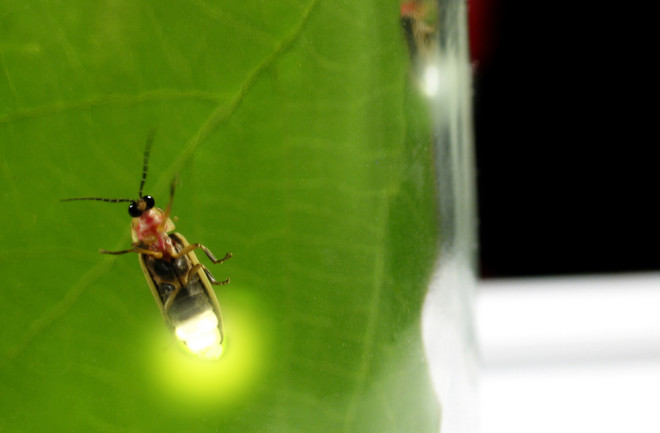 Light-emitting diodes (LEDs) are far more energy efficient than incandescent or compact fluorescent bulbs. Unfortunately, much of the light LEDs produce remains trapped within the inner surfaces of the diode. Engineers tried to build a brighter LED, but when modifications hit a plateau, they sought inspiration from the bugs that light up many a summer night.

Jagged scales on a firefly's lantern help the bug shine brighter. Scientists designed synthetic scales based on this model and applied them to LEDs to make them emit one and a half times their normal light. | Optics Express

An international team of researchers led by Annick Bay at the University of Namur in Belgium examined the light-emitting organ of Photuris fireflies under a scanning electron microscope and identified seven structures that showed promise for boosting LED output. Using computer simulations, the scientists determined that the most influential aspect was misfit scales on the organ’s surface that give it a rough, shingle-like quality. The multiple abrupt edges scatter light rays to increase the amount of light that escapes the glowing organ.

Led by Bay, a second team then etched a similar shingle-like surface and added it to existing LED bulbs, boosting their light output by 55 percent. Now the researchers are using computer models to further refine the firefly-mimicking surface and maximize light output.

[This article originally appeared in print as "A Brighter Idea."]

Gaming for Science: How Video Games Are Making Research Fun