Fire in the Brain

Can programmable implants help epileptics detect the onset of seizures?

For 50 million epileptics in the world, daily life can be sheer terror. Will I seize when I'm driving? Will I collapse while I'm bathing my baby? Some epileptics are lucky enough to get a warning, such as seeing a weird light or tasting something funny or hearing something odd. These auras allow them to prepare for a firestorm in the brain that can cause convulsions, muscle spasms, and loss of consciousness. Others say their dogs can sense an attack on the way. For the vast majority of epileptics, however, there is no warning—ever. And for more than 12 1/2 million epileptics, even heavy daily doses of antiseizure medication will not keep the disease at bay. 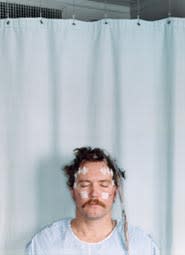 "I felt like a dog on a leash," says Franklin Audis, 39, who remained tethered to electroencephalograph monitors throughout a seven-day stay at an epilepsy ward in Phoenix. Audis awaits the day when a chip implant could provide advance warning of a seizure: "It would be great to have medication automatically kick in."

The day when epileptics will be able to fend off the frenzied neural discharges is fast approaching, say researchers at a special observation ward at the Barrow Neurological Institute in Phoenix. Most of the patients in this ward suffer seizures every day. Signs posted at the nurses' stations ask visitors not to stare. Each person has wires sprouting from his or her head. Each is constantly connected to electroencephalograph (EEG) monitors. There is a general atmosphere of dread here as each person waits for the next seizure. Nevertheless, their seizures have added to a growing body of important data.

Using chaos theory, Leonidas Iasemidis, a bioengineer at Arizona StateUniversity, and Chris Sackellares, a neurologist at the University of Florida, have uncovered hidden signs in EEG readings that warn of impending seizures. There's enough predictability, they say, to develop chip implants programmed to detect seizures in time to trigger customized drug or neural shock therapies. "If you see a seizure coming 20 minutes in advance, you have time to do something about it," says John F. Kerrigan, a neurologist at Barrow who specializes in pediatric epilepsy.

Sackellares has long been fascinated with the tendency of epilepsy to send the brain into temporary turmoil without causing permanent brain damage. In the mid-1980s, while director of the epilepsy program at the University of Michigan, he enlisted the help of Iasemidis, then a grad student, to solve a mystery: How can the brain function perfectly well at one moment and then be gripped seconds later by a torrent of electrical activity, only to return to normal without a hitch? "I had been reading about chaos theory," recalls Sackellares, "and it occurred to me that some of the properties of chaotic systems could be an explanation for epileptic seizures."

Chaos theorists look for hidden signs of mathematical order in systems that appear to be governed by random patterns of cause and effect. Weather is a classic chaotic system. The flapping of a butterfly's wings, chaos theorists contend, can create a breeze that may lead to a rainstorm on the other side of the world.

In hopes of finding the butterfly wings of epilepsy, Iasemidis and Sackellares began poring over scores of EEGs collected from epileptics who had come to the university hospital for long-term monitoring. An EEG measures nothing more complicated than the electrical activity of nerve cells firing to communicate with one another. Two dozen or so electrodes are placed on the scalp or planted directly into the brain. With a normal waking brain, the tracings jump up and down in a leisurely but chaotic manner, something like the readout on a heart monitor. But when a seizure occurs, neural activity lurches into a violent rhythm. And when Iasemidis filtered EEG data through chaos theory mathematical formulas, previously concealed patterns gradually began to emerge.

For each electrode, Iasemidis calculated a measure of chaos called the Lyapunov exponent. The mathematics is dense, but basically the exponent gives a numerical value to just how chaotic a system is at any given moment. And the extent to which the level of chaos rises or falls over time can be plotted on a simple graph. In a normal brain, neurons fire at their own speed, randomly; the EEG line from one electrode does not follow the same pattern as the line from any other electrode. But in an epileptic's brain, Iasemidis discovered, the amount of chaos decreases as neurons throughout the brain begin to fire in sync with the part of the brain where the seizure will eventually begin, a group of neurons referred to as the focus. Researchers call the process dynamical entrainment, and they now realize it can start days in advance of an attack.

When a seizure is imminent, "the brain no longer functions as a multitasking, multiprocessing machine," Iasemidis says. Imagine that your computer, instead of simultaneously playing a CD and running a word-processing program, e-mail, an Internet browser, and five other tasks, can now only play the same game of solitaire over and over. Iasemidis and his colleagues think the focus sends out a continuous stream of impulses to other parts of the brain, urging them to adopt its behavior. Sometimes, the rest of the brain responds. "It is kind of like somebody is knocking at the door all the time and occasionally the door is going to open. When it does, there will be entrainment," says Iasemidis. After the seizing stops, neurons gradually pick back up on their individual rhythms, resume their normal activity, and order turns to chaos again. It is the overwhelming electrical kick of the seizure, Iasemidis says, that puts everything right again and reboots the brain.

When Iasemidis discovered the pre-seizure period in 1988, he immediately realized it was the key to seizure prediction. But devising an algorithm that could automatically spot the changes in brain wave activity took him many more years. "You can't look at an EEG and see the pattern. It's not discernible to the eye," he says. Moreover, he faced the challenge of proving that what he'd found wasn't just the tease of sophisticated hindsight. "What we were sure of back in 1988 was that these precursors would appear before every seizure. But that's not really prediction." He compares the process to forecasting earthquakes. "Say you find something, a precursor, that consistently happens before an earthquake. So you write a program and let it run to see if it catches the next earthquake or misses it. If it doesn't give many false warnings, that's prediction," he says. "We weren't convinced we could do that with epilepsy until about two years ago, when we knew we could analyze long sets of data, days' worth, from many patients, and get mostly true positives."

Sackellares and Iasemidis received a patent for the technique last October. Using the algorithm to analyze retrospective sets of EEG data, they can identify seizures in the making 90 percent of the time, with an average of 75 minutes' notice. As with quakes, however, the acid test will be in real time. 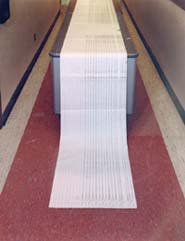 The electroencephalograph, right, documents one of the first epileptic attacks bioengineer Leonidas Iasemidis analyzed using chaos theory. The spike patterns at the bottom of the printout mark the onset of the seizure.

The researchers will know within a matter of months if the scheme works. Iasemidis has installed the program on monitoring equipment at three sites in Phoenix: the Barrow Neurological Institute, a local branch of the Mayo Clinic, and at a Veterans Administration hospital. By summer it will be churning through EEG data streaming in from patients under surveillance. "The plan is that there will be some kind of alarm—it could be a light or a bell—that will tell physicians and the nursing staff that a seizure is coming, so they can be in the room with the patient when it happens," says Iasemidis.

In as little as four years, Iasemidis and Sackellares hope to have in hand a prediction chip that can be implanted directly into an epileptic's brain. Iasemidis says: "You could have electrodes that wirelessly transmit data to a recorder, which would analyze the signals and predict when a seizure might happen. That could be connected to a pump that would automatically release small amounts of a drug only when it is needed. You might need only a very small amount of the drug, because the good thing about chaotic systems is that a very small intervention can knock them out of the route they've been following."

Alternatively, the chip could control a nerve stimulator. Stimulators are already used to zap neck nerves to reduce severe seizures. Much further in the future, similar chips may be able to control other brain disorders such as sleepwalking, sleep apnea, night terrors, and panic attacks. Sackellares's wild dream "is that we will revolutionize the treatment of seizure. No longer will we have to treat with high concentrations of drugs or even rely on patients to take their medication. We'll be able to reset the brain to a normal condition and do it automatically."

For more about the efforts to explore the link between chaos and epilepsy, see the Bioengineering Research Partnership for Brain Dynamics page: http://brp.mbi.ufl.edu.

The Web site for the Department of Bioengineering at Arizona StateUniversity, which links to Iasemidis's page, is www.eas.asu.edu/~bme.