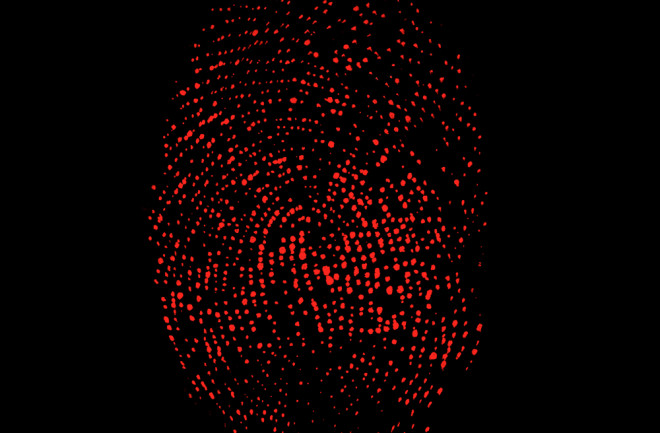 Fluorescence sweat pore images on a fingertip. Credit: Kim et al., Nature Communications Many a crime has been solved via fingerprints. But those unique traces of a person's fingertip fade over time. And forensic scientists need pretty much an entire fingerprint to get enough lines to make an accurate identification. Now researchers have a more reliable way of fingerprinting with less of a print: By mapping the tiny sweat pores on a person's finger. Each of the ridges on a person's fingertip is lined with pores. Scientists have known for a century that these tiny holes secrete itty bitty dots of sweat, and that therefore the sweat marks could map an individual fingerprint. But before now there hasn't been a way to easily analyze such sweat-prints.

A materials scientist named Jong-Man Kim of Hanyang University in Seoul, South Korea, just came up with a solution based on chemistry. The key chemical is a polymer called a polydiacetylene, which turns from blue to red when exposed to water. And it doesn't take much---a drop just one-thousandth of a cubic millimeter is enough to trigger the color change. It's the only such polymer that responds to plan old water. Plus it's cheap and easy to use: The polymer can be loaded into an inkjet cartridge and printed on pieces of plastic for quick and easy fingerprinting. And with so many unique data points to work with, it takes a fraction of a fingerprint to make an accurate match.

that forensics teams can grab a suspect's sweat dots from a piece of paper a decade after the fact, even if there was no fingerprint. But that evidence was often thrown out because there hasn't been a good way to map people's pores or make a match. This study may change that. The results, published in Nature Communications today, offer a cheap and more reliable way to do fingerprinting, even long after the fact. So watch out, sweaty-fingered criminals---time may no longer be on your side.