Researchers can see the contaminants in an individual fingerprint. 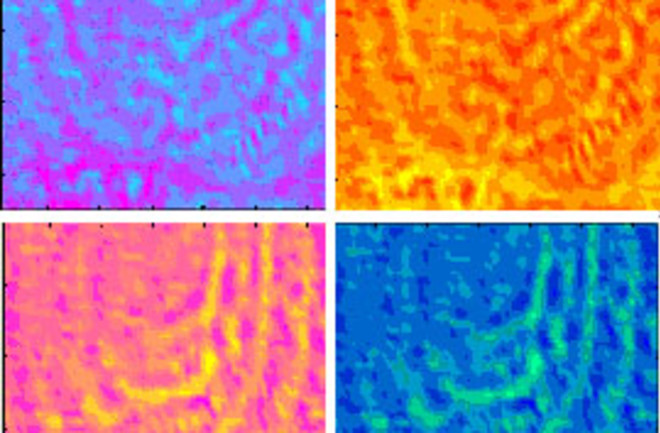 For more than a century, investigators have identified suspects by looking at the unique shapes of their fingerprints, carefully noting such details as where the lines end, bifurcate, and diverge. But the few micrograms of sweat and dirt left behind in a fingerprint contain more than a physical pattern: The chemicals in the print are clues themselves, and a new technique shows promise for using this information to make more accurate fingerprint identifications.

The technique is a sort of chemical photography that takes a snapshot of the traces of substances on a person's hands when she leaves a print—everything from the mundane, like caffeine spilled on a coffee-drinker’s fingers, to incriminating particles of explosives. "This is potentially a very valuable procedure for certain cases," says Lawrence Kobilinsky, chair of the science department at the John Jay College of Criminal Justice. "I think it's a significant advancement."

In a paper published August 1 in the journal Analytical Chemistry, Sergei Kazarian, Camilla Ricci, and Steve Bleay described the method in which they used infrared spectroscopy to analyze the content of fingerprints. Organic molecules absorb particular frequencies of infrared radiation, and spectroscopy detects these frequencies so that researchers can identify the chemicals in a sample. This technology is sometimes used in crime labs to determine the origin of paint chips or to analyze ink in potential forgeries, but until now it could not be applied to fingerprints left at crime scenes.

In using infrared spectroscopy to analyze fingerprints, Kazarian, a physical chemist at Imperial College London, relied on a gelatin tape that is sometimes used to lift footprints, fingerprints, and other evidence. This particular tape makes the infrared analysis possible because its own chemical composition doesn't interfere with the infrared analysis of the fingerprint. For the study, Kazarian and his colleagues lifted prints from such surfaces as a door handle and a computer screen. Prints left on porous surfaces, like newspaper, are difficult to analyze because the pores disrupt the pattern.

By employing an imaging technology initially developed for the military, Kazarian's technique also has the unique ability to differentiate the content of the fingerprint at different depths. He says this could help an investigator distinguish between chemicals in a print and those already on a surface before it was touched. This sort of contamination is always a concern at crime scenes, says Kobilinsky.

The combination Kazarian has put together could bolster criminal identifications made from the physical pattern of a fingerprint, a technique that is not infallible, as is often portrayed. In a particularly high-profile mistake, the FBI erroneously matched a print from a plastic bag at the Madrid train bombings to a lawyer from Portland, Oregon, who was then unfairly jailed for two weeks. The FBI said his prints bore an “unusual similarity” to those of the guilty party.

Kazarianisn't the only researcher working to glean more than the standard patterns from fingerprints. Crime-scene investigators can already gather DNA from skin cells sloughed off into fingerprints. Now a team of British researchers, led by chemist David Russell of the University of East Anglia, has found a way to visualize the chemicals that show up in sweat after the body has processed a drug. Their research focused on a chemical produced by the breakdown of nicotine in the body, which the researchers made visible by tagging it with fluorescent antibodies. The researchers are currently working to make their technique more practical for law-enforcement use.

Kazarian’s method for revealing contaminants probably won’t show up in crime labs anytime soon, says Kobilinsky. Not only is further research needed but the technique must pass admissibility standards in the courtroom.