A high-tech investigation confirmed the use of neurotoxins in the Syrian chemical attacks. 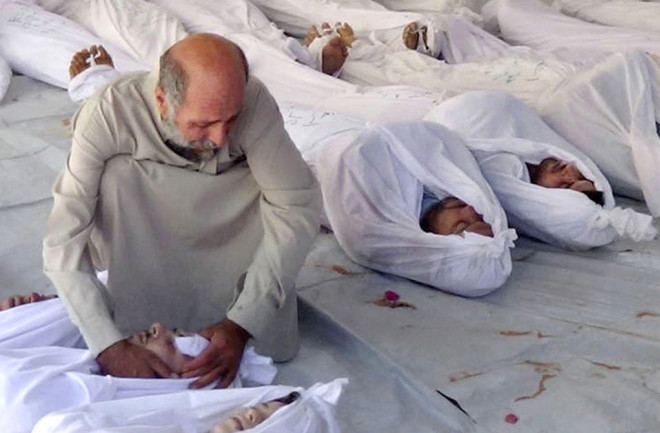 A man mourns over a dead body after a poison gas attack in Damascus, Syria in August. | AP Photo/Media Office of Douma City

Scientific advancements rarely become the crux of diplomacy. But in September, labs working with the United Nations used faster and more sophisticated analytic techniques to show that Syrian civilians were killed by the chemical weapon sarin on Aug. 21 — evidence crucial to debates about whether the global community should intervene.

U.N. inspectors were not able to visit the attack sites in Damascus until five to eight days after rockets struck. In the past, this delay could have made the poison difficult to detect. But today’s mass spectrometers, which determine the molecular makeup of a sample by exactly measuring the mass of its components, are roughly 1,000 times as sensitive as those used in 1995, when sarin was released in a Tokyo subway, says Maarten Nieuwenhuizen, a senior chemical, biological, radiological and nuclear protection consultant at TNO laboratories in the Netherlands.

Although the U.N. report offers few details, Nieuwenhuizen says the devices likely pinpointed molecules that formed when neurotoxins react with blood proteins — a signature that can persist in the blood up to 90 days. The analysis played a role in garnering a Nobel Peace Prize for the Organisation for the Prohibition of Chemical Weapons.

[This article originally appeared in print as "Fast Proof of Nerve Gas Attacks in Syria."]