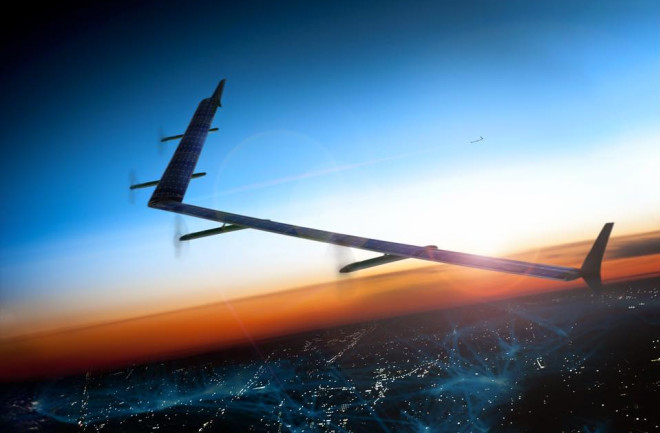 (Credit: Facebook) Facebook took another step toward its goal of connecting all of the world’s citizens to the Internet. On Thursday, Facebook founder Mark Zuckerberg announced that they finished constructing their first full-scale prototype of Aquila, a solar-powered, unmanned aircraft that could someday provide Internet access for people living in places lacking the infrastructure required to surf the Web.

Engineers at Facebook hope to deliver on their promise by building very large, yet lightweight, aircraft that use lasers to transmit data. The Aquila, according to Zuckerberg, has the wingspan of a Boeing 737 but weighs as much as a Toyota Prius. It can also stay airborne for up to three months. It also flies really, really high: 60,000 to 90,000 feet, which is head and shoulders above commercial airline traffic.

Facebook envisions sending a fleet of these unmanned craft into the sky. A ground station would feed a radio Internet signal to a mothership plane, which would, in turn, relay that signal via lasers to secondary planes in the network, tasked with beaming the signal back down to Earth in select locations. The arrangement would create an airborne infrastructure that provides Internet access to previously inaccessible places. Zuckerberg, in his announcement, said his team has successfully tested a laser system that can transmit 10 gigabits of data per second, which is blazing fast. However the craft can't just be thrown into the sky like a hobbyist drone because it's so large and fragile. Its designers plan for Aquila to hitch a ride on a helium balloon to reach an altitude of about 70,000 feet, at which time Aquila will detach and start cruising. Facebook completed its first test flight on a smaller prototype in March. The company will begin test flights of its full-size drone later this year.

The ambitious drone plan is just one facet of Facebook’s Internet.org initiative, which was launched in 2013 and has already connected more than 7 million people to the Internet in underdeveloped countries. Among its many projects, Internet.org designs apps that allow people to browse health and employment websites free of data charges, and helps developers understand how to build apps so they will work in other countries. Facebook hopes to have Internet.org operating in 100 countries by the end of 2015. As far as Aquila is concerned, she’s still a ways from active duty. Facebook will continue to fine-tune the drone’s design and improve its power and solar technology.