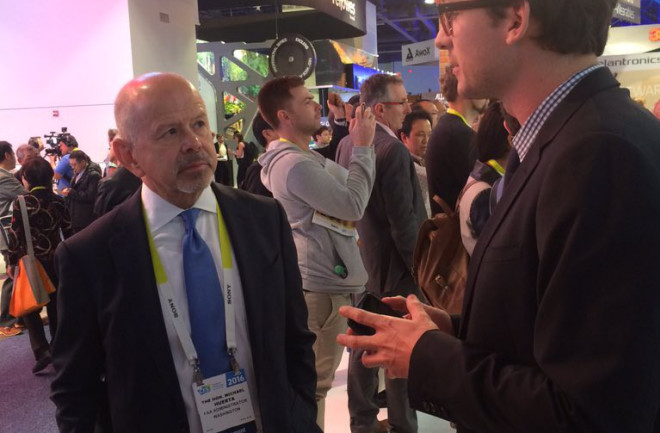 FAA Administrator Michael Huerta with registration task force member and senseFly Manager Business Development Baptiste Tripard at CES 2016.Photo credit: The FAA On Jan. 6, FAA Administrator Michael Huerta addressed a gathering at CES 2016, the Consumer Electronics Show in Las Vegas, NV. He was joined at his first address of the year by four members of the UAS registration task force, including Dave Vos, project lead for Google X’s Project Wing; Nancy Egan, 3D Robotics general counsel; Brendan Schulman, vice president of policy and legal affairs for DJI; and Doug Johnson, vice president of technology policy for the Consumer Technology Association (CTA), which runs CES. Huerta praised the task force’s work, acknowledging its involvement as a boost to the speed of the UAS registration system’s design and implementation. “It’s proof that government, working with private industry, can cut through red tape and use technology to tackle emerging challenges,” he said. “The registration process can provide a little—sometimes a lot—to dislike, but we got a system quickly,” Egan said. “We should do it again.” The belief is that drone registration will help educate a new generation of “airspace users” and fold UAS operators into the traditional aviation safety culture. Further, registration can help the FAA “track down people who operate unsafely.” “We are at the dawn of a new era,” Schulman said. “To date, consumers have enjoyed freedom from drone regulations, and the result of that freedom has been tremendously positive innovation in what is now viewed by many people as the greatest revolution in aviation since the jet engine, if not the Wright brothers.”

Photo credit: The Consumer Technology Association From Schulman’s point of view, despite the negative press garnered in 2015, the technology drone manufacturers have been introducing into their products, such as geofencing, has done much to improve safety for both flyers and bystanders. To hammer home the message of safe flying, Huerta also touted the FAA’s B4UFLY app, available for free on iOS and in beta testing for Android users. The app provides the user with rules for the proposed flight location (for example, no fly zones or restricted areas), allows pilots to plan future flights, offers interactive maps, and links to FAA UAS resources. On the education front, for the past year, companies such as Parrot, DJI, and Yuneec have provided Know Before You Fly information with their aircraft. Best Buy supplied similar information on receipts for drones sold during the recent holidays. Additionally, the CTA is working on a plan to standardize drone serial numbers for easier registration and tracking. This would allow for one-stop shopping with an app, Johnson said, again bolstering the message of safety and accountability. Fees, privacy, and enforcement remain persistent concerns. Vos was nonchalant about the FAA’s nominal registration charge. “You get to use the same number on all your vehicles for $5,” he said. “That’s not much in the grand scheme of things.” Schulman, a member of the task force, wondered if it’s wise to allow the public to search the registry by number, revealing an owner’s address, despite Huerta’s assertions that privacy would be protected. To Schulman’s thinking, it wouldn’t take much for someone to see a registration number written in plain sight on a UAS and find the owner’s home via the database. This could be particularly problematic if the owner happens to be a minor. Regarding enforcement, Huerta maintained that the FAA works closely with law enforcement to go after anyone operating in an unsafe manner. “What we’re trying to get at is voluntary compliance,” he said. Huerta reminded everyone that there was much work still to be done. However, he indicated the plan is to eventually have UAS pilots integrated as full users into the NAS. “No single initiative is the single solution when it comes to safely integrating unmanned aircraft, be they commercial or for recreational use, in the national airspace system,” Huerta said.