Driven by technological advances, humans are changing faster than ever. Coming soon: our next stage, Homo evolutus 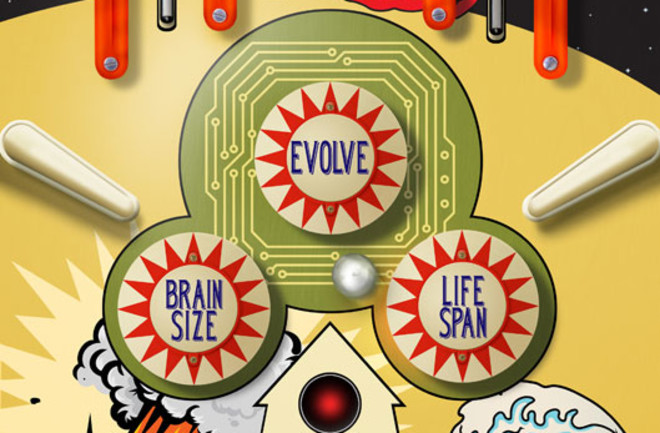 Evolution is like a search engine, though not a very good one. We’re not talking Google. We might be talking Google drunk, blindfolded, on crutches, and with a frontal lobotomy.

This is why the Nobel laureate François Jacob described evolution as a tinkerer, not an engineer. Engineers know where they’re going—they have an aim, a plan. Tinkerers are just fastening parts together, sticking this bit onto that in an ongoing exploration of functional possibilities, with no goal in mind.

The insight that the evolutionary search engine proceeds blindly—and therefore gradually—came from Charles Darwin. He realized that because resources are often scarce, organisms are always in competition with one another. In the endless battle, those individuals who happen to possess some slight innate advantage will flourish and pass along that advantage to their descendants. By this method, new species could be created, one imperfect change at a time, but this process certainly was not going to happen quickly.

Historically, only a tremendous geological shift, like a meteorite impact or an ice age, has broadly sped up the process. What these shifts provide is a wedge that opens up novel ecological niches, new possibilities for the search engine of evolution to explore. This fits-and-starts hypothesis [pdf]—what evolutionary theorists Stephen J. Gould and Niles Eldredge dubbed “punctuated equilibrium” in 1972—helps explain the seemingly sudden appearance of new species in the fossil record.

But really, there is nothing all that sudden about it. According to researchers, those periods of punctuation span roughly 50,000 to 100,000 years. Fossils just don’t keep very good records.

Mostly, natural selection is a plodder’s game. Sure, one individual might be significantly taller or smarter or more long-lived than his peers, but no matter how beneficial the variation, extremely long stretches of time are required for it to spread across an entire population.

That was supposed to be the rule, at least.