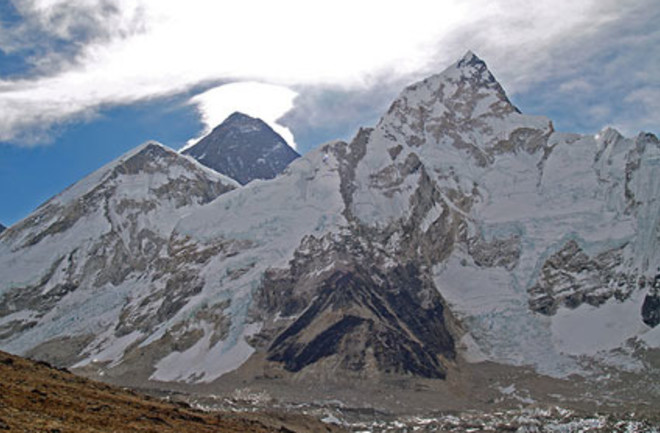 Ncell, a subsidiary of the Swedish telecom company TeliaSonera, has installed a 3G data network in a Nepalese town that should reach the summit of Mount Everest. This high up, high-tech improvement will allow summit-ers to communicate with friends, family, and organizers from the top of the world. A phone base station was set up near the town of Gorakshep at 17,000 feet above sea level, and the signal should reach to the peak about 12,000 feet above that, telecom officials said--but it hasn't been tested yet. The service should be fast enough to allow adventurers to make video calls and surf the Internet from their phones. Lars Nyberg, CEO of TeliaSonera, told the Associated Foreign Press how excited they were to take the mountain into the wireless internet age:

"This is a great milestone for mobile communications as the 3G high speed internet will bring faster, more affordable telecommunication services from the world's tallest mountain," said Lars Nyberg.

The service is definitely an upgrade from the voice-only network set up in 2007 by China Mobile on the Chinese side of the mountain, and the erratic coverage of satellite phones. Who wouldn't want to update their Facebook status to "chilling at the summit of Mount Everest" or "check-in" there? Now we can all wait with bated breath to see who gets the first Mayorship

. An Irish mountain climber named Gavin Bate was aiming to send the first tweet from the summit in 2009, but because of the weather conditions couldn't reach the summit. Perhaps as people start to use the data network Everest will get better reviews on Google Maps

; right now it's at 2.5 stars. But apparently the mountain committee had other ideas of how to use the connection--at least that's what Ang Tshering Sherpa told the Associated Foreign Press

"The erratic and expensive satellite connection that many times does not work for days will be replaced with this service, making it possible for all climbers to keep in touch with their organisers and family," said Ang Tshering Sherpa, a member of the International Mountain Protection Commission. "This will also be helpful, possibly, when there is an accident or an expedition mishap," he added.

80beats: Why Climbers Die on Everest: It’s Not the Avalanches (or the Yeti)

DISCOVER: How Much Does The Internet Weigh?