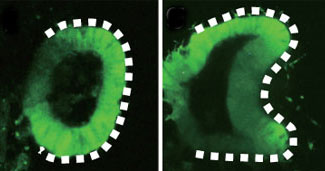 The stem cells formed a sac that then folded in half a couple days later (see image above, courtesy of Nature), forming the optic cup.

What’s the News: Give a blob of cells the right environment—lots of nutrients, special chemical signals, and a comfy gel cushion—and they just might grow you a body part. In a feat of bioengineering, scientists at the RIKEN Center for Developmental Biology in Japan have grown a retina from mouse embryonic stem cells. Remarkably, much of the development happened spontaneously, indicating that even undifferentiated cells have a blueprint in mind. Researchers hope the work will someday yield transplantable retinas for people with diseases like retinitis pigmentosa

. "When I received the manuscript, I was stunned, I really was,” commented human molecular geneticist Robin Ali (via Nature News

). “I never though I'd see the day where you have recapitulation of development in a dish." How the Heck: Supported by a gel that mimics cells’ natural environment, the stem cells were immersed in a bath of chemicals that directed their growth into retinal cells. Just as in normal embryonic development, over the course of about a week the cells organized themselves into a small sac that spontaneously folded itself in half to form the optic cup, a structure that consists of the retina and its supporting layer. What’s the Context:

Not So Fast: Despite numerous hopeful headlines, growing retinas for transplantation into humans is not yet within reach. It’s not clear yet whether the RIKEN retinas are functional—that is, whether they will talk to (and make sense to) the brain when inserted into an eye. Also, the technique will need to be adapted to human stem cells, which is no mean feat. Reference: Sasai et al. Self-organizing optic-cup morphogenesis in three-dimensional culture. Nature472, 51–56 (07 April 2011) doi:10.1038/nature09941

NIH Director on Human Gene Editing: 'We Must Never Allow our Technology to Eclipse our Humanity'