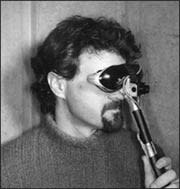 Fond of those nifty virtual reality helmets? Well, get over it. Engineers now regard helmets, visors, and anything else that cuts you off from the rest of the world as old hat. They want you to be able to toggle effortlessly between reality and virtual reality. The MagicBook, a virtual pop-up volume conceived by Mark Billinghurst and his collaborators in Japan, Hirokazu Kato and Ivan Poupyrev, can be enjoyed the time-honored way: flipping pages, reading words, checking out the pics. But it offers another playful option. As the reader, you are invited to interact with characters and objects in the book.

In one of the team's tales, a fearsome ninja steals a princess's hand mirror. She entreats a noble samurai to recover it. Now the twist: If you gaze at the page using a wand fitted with glasses, a camera, and a control button, the computer running this show interprets each illustration. When you look at the mirror, the machine retrieves a 3-D image from its archive, and lo, the maiden's looking glass appears to bob atop the page. Turn your head, and you can view the object from any angle. Hit that button, and you can tramp through a scene with the characters. "Kids up to high school age love it," says Billinghurst, a 34-year-old doctoral student in human interface technology.

So will the rest of us, who are now one step closer to manipulating virtual objects in real space. A surgical resident could, for example, beam a virtual body into a virtual operating room in order to practice a coronary bypass. The MagicBook is a portal to the future, one Billinghurst finds strangely appropriate; after all, he says, "books were the first virtual reality."