Enter the nano-spiders – independent walking robots made of DNA 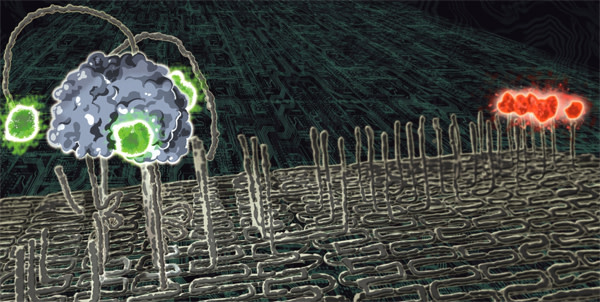 Two spiders are walking along a track – a seemingly ordinary scene, but these are no ordinary spiders. They are molecular robots and they, like the tracks they stride over, are fashioned from DNA. One of them has four legs and marches over its DNA landscape, turning and stopping with no controls from its human creators. The other has four legs and three arms – it walks along a miniature assembly line, picking up three pieces of cargo from loading machines (also made of DNA) and attaching them to itself. All of this is happening at the nanometre scale, far beyond what the naked eye can discern. Welcome to the exciting future of nanotechnology. The two robots are the stars of two new papers that describe the latest advances in making independent, programmable nano-scale robots out of individual molecules. Such creations have featured in science-fiction stories for decades, from Michael Crichton’s Prey to Red Dwarf, but in reality, there are many barriers to creating such machines. For a start, big robots can be loaded with masses of software that guides their actions – no such luck at the nano-level. The two new studies have solved this problem by programming the robots’ actions into their environment rather than their bodies. Standing on the shoulders of giants, both studies fuse two of the most interesting advances in nanotechnology: the design of DNA machines, fashioned from life’s essential double helix and possessing the ability to walk about; and the invention of DNA origami, where sets of specially constructed DNA molecules can be fused together into beautiful sheets and sculptures. Combine the two and you get a robot walker and a track for it to walk upon. At Arizona State University, Kyle Lund’s robot (which he does actually call a spider) can move about completely of its own accord. Its program is completely written into its landscape. The spider’s body is a molecule called streptavidin and each of its legs are single-stranded ‘DNAzymes’ – one half of the famous double helix, with the added ability to cut other DNA strands. In doing so, it shortens the length of any strand that it happens to walk on. The spider walks along a sheet of DNA origami, with sequences that match the strands that make up the spider’s legs. As the spider takes a step, its leg sticks to one of these complementary strands and cuts it, shortening that bit of track. This shortened surface interacts with the spider’s legs less strongly than a full-length piece of track, and that’s the key to herding the spider in a single direction. When the spider steps, it leaves a trail of cut, unattractive DNA behind it, with paths of fresh, enticing strands ahead of it. Its legs could land anywhere but they stay for longer on a piece of track that hasn’t already been stepped on. Even if it steps randomly, it should eventually move to new terrain and by making the track narrow enough so that it can only go in one direction, Lund could steer its steps. It’s a fiendishly clever system – the walking spider shapes its environment in a way that controls its own behaviour. Only three of the legs are for walking. The fourth is an anchor that leashes the robot to its starting post and it takes a special short piece of DNA to unleash it. This small trigger sticks to the starting position instead, ousting the robot’s fourth leg, and freeing the other three to carry it onwards. The robot follows the curve of the track until it reaches a pre-determined finishing line, a stretch of DNA that its legs cannot cut. Meanwhile, at New York University, Hongzhou Gu has also built a DNA robot that walks on a DNA origami landscape. His walker isn’t quite as independent as Lund’s and needs the right triggers to take its steps. But what it sacrifices in autonomy, it makes up for in complexity. This robot is part of a nano-factory, a miniature assembly line that can manufacture eight different products. Like Lund’s spider, Gu’s triangular robot has single-stranded DNA for limbs, but his has four legs and three arms. The legs walk along a specially designed DNA landscape but they don’t cut the strands they step on. Instead, the robot needs anchor strands to link its legs to the tracks, and fuel strands to displace them. By sequentially adding these strands, Gu can make his robot walk. So far, this seems like a less impressive and elegant system than Lund’s autonomous walker. But Gu’s robot isn’t alone. It’s accompanied by three more DNA ‘loading’ machines, each carrying a different cargo of gold particles – a small 5-nanometre one, a pair of these, and a large(r) 10-nanometre one. Each of these loaders can be set in an ‘on’ of ‘off’ position. As the robot walks, it encounters each loader in turn and those that are switched on transfer their cargo to it. By tweaking the settings of the loaders, Gu can create eight possible products, forged of a combination of the three types of gold particles. Now this is impressive – in a related editorial, Lloyd Smith from the University of Wisconsin says, “This is the first time that systems of nanomachines, rather than individual devices, have been used to perform operations, constituting a crucial advance in the evolution of DNA nanotechnology.” Neither robot quite scales the heady heights of science-fiction nanotechnology. One is autonomous but simple, while the other is complex but requires much in the way of human intervention. And both are quite limited in the things that they can do. But these robots are taking tiny but important steps towards greater things. They are a sign that the field of nanotechnology is set for great strides in the future. Reference: Nature http://dx.doi.org/10.1038/nature09012 and http://dx.doi.org/10.1038/nature09026Image: 3D artwork by Paul Michelotti More on nanotechnology: