<em>Noah</em> Isn’t Accurate Because It Can’t Be 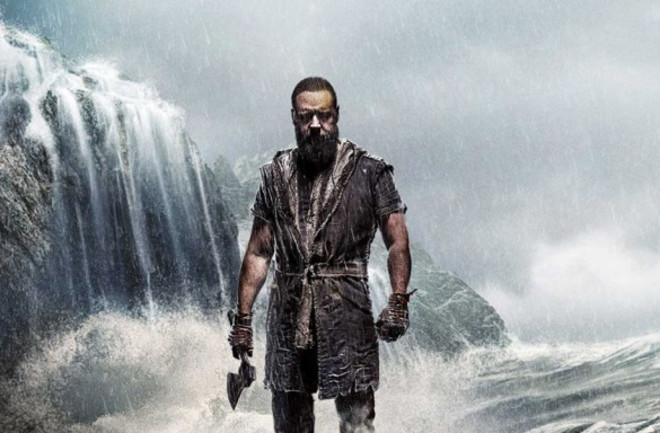 Image credit: Paramount Pictures Religious moviegoers are concerned about the film Noah. Debuting this Friday, the movie will not be an exact retelling of the biblical tale, and this irked religious leaders and commentators enough that a disclaimer was put into Noah without director Darren Aronofsky’s knowledge. Artistic license met biblical literalism, an awkward compromise was reached, but prominent Christian activists will still probably leave disappointed and the controversy will go on. The problem is that Noah doesn’t need a disclaimer or a controversy. Aronofsky has the right to retell a story that is necessarily inaccurate. The Story of Noah* Under pressure from religious leaders and audiences, Aronofsky’s Noah will feature the following disclaimer:

The film is inspired by the story of Noah. While artistic license has been taken, we believe that this film is true to the essence, values, and integrity of a story that is a cornerstone of faith for millions of people worldwide. The biblical story of Noah can be found in the book of Genesis.

It’s understandably frustrating when a movie fails to faithfully adapt a story from a book. Harry Potter wasn’t perfect, Fight Club was a bit neutered, and World War Z only had its title in common. Some things just don’t translate, and modern, flashy films demand a bit more action and less exposition. Book lovers can be frustrated, but they also have to understand the constraints of filmmaking. But Noah is different. Regardless of what poll asks what question about biblical creationism, it’s safe to say that a lot of Americans take Noah’s story of the Ark and the Flood seriously. So when Darren Aronofsky decided to make Noah a bit differently than the Bible would dictate, for the devout it could be like changing the way the Revolutionary War happened. And here in lies the problem—a disclaimer is unreasonable for a story that likely never happened. Putting the equivalent of “based on true events” in front of each Noah showing gives the impression that there is a true story to hold up as the standard. There isn’t. Jurassic ArkNoah, now with a disclaimer, is in an odd position. Most movies implying they were based on true events…have true events to base a script on. Noah does not for a number of reasons. (It’s not my objective to fully “debunk” Noah and his Ark. However, I do think that this particular marketing plan does advance the wrong ideas about what we know in a number of scientific disciplines. So, I will proceed.) First and maybe most obviously, Noah would be long dead by the time God flooded the Earth. Genesis says that when it’s time for him to build the Ark, he is at the fledgling age of 500. No human has ever lived this long, and likely never will based on the biological constraints of aging. Next, the Ark would never survive the newly formed seas. Basically a gigantic wooden box, the Ark was supposedly made out of gopher wood—a terrible material for building larger vessels (there is a reason we use materials like steel). It would break apart likely from just the distribution of animals inside it or anything other than completely calm waters. Then there are the animals. Where did they come from? If the Earth was created in its present form, then a great number of animals had to swim from separate continents to somewhere in ancient Mesopotamia—not a small task for almost 350,000 species of beetles. And how many animals were there? Most scientific estimates put the number of species on Earth in the millions, which means that almost double that number had to fit on the Ark (two of each sexually reproducing animal). A few thousands organisms could barely squeeze between the wooden ribs of the Ark. The questions really start to pile up here. How could literally millions of animals ranging in size from fruit fly to African elephant fit on one creaky boat? How could all the food required to feed these animals for 40 days and nights not at least double the weight requirements of the Ark and break the boat? If only “clean” animals were included on the Ark, how do we have more than just clean animals today? Evolution? What about the dinosaurs? Creationist interpretation puts T. rex and Noah in the same era. Were two of each gigantic carnivorous lizard on the boat with a 500-year old man and thousands of juicy mammals? What about animal welfare? How could millions of species survive, cramped in the confines of the Ark without exercise, special and varied diets, proper ventilation, or hundreds of people on sanitation duty? How did these animals exit the Ark and make it across the oceans to all the continents we see them on today? What the hell happened to all the world’s plants? And then there is the geological and historical record. There simply is no good evidence that a global flood ever happened. Mountains would have an erosion record that matched across the globe. Stratigraphic analysis would show consistent, Earth-wide layers of sediment (akin to how we see a layer of iridium across the globe marking the dinosaur’s extinction event). Tree ring data would also document a great catastrophe. But nothing matches up. Early Egyptian history would have recorded the great flood and mentioned at least one thing about it. It doesn’t. The world’s population would have rebounded very slowly—probably not at all—after all but one family was wiped out. The Bible says otherwise. Noah lives long enough after the flood to see cities in just one generation. The story of Noah is self-contradictory, uncorroborated by independent historical evidence, and is generally at odds with everything we know about our planet’s geology, biology, and species diversity. I admit it’s gratuitous to subject an ancient myth to such scrutiny, but if documentary-style disclaimers are to be put on Noah for its supposed inaccuracy, it should be held to documentary-level standards. That standard seems arbitrarily high for a story out of the Bible, which is why director Darren Aronofsky had every right to make angels into giant rock monsters.

If the biblical story of Noah can’t be considered on the same historical footing as the Vietnam war, for example, what the disclaimer resulting from religious blowback represents is a movie studio protecting profits. Seeing as most of America is Christian, offending most of America before a major movie release is a terrible business move. That’s just pragmatism. But such appeasement gives the impression that the original story the movie is based on has more truth to offer. That simply isn’t true, and it sets a dangerous precedent of conflating what we believe to be true with what we know is true objectively.

Like how a book changes when it becomes a movie, there is also an argument for biblical reinterpretation here. Many modern Christian scholars do not take all the stories of the Bible literally. Jesus walking on water is an allegory, not fluid mechanics. God destroying the cities of Sodom and Gomorrah is a warning, not a historical battle. Doubting Thomas is an example, not a person. The story of Noah, with all of its scientific and historical impossibilities, can be read the same way. It’s a story of punishment and redemption and family, not physics, biology, and history. Director Darrren Aronofsky should therefore be afforded the leeway to “spice-up” Noah. As long as the basic message remains, having Russell Crowe fend off some doomed would-be shipmates is just not something to demand disclaimers over. Allowing these interpretations without incident would show a modern, understanding religious base that might put aside small “inaccuracies” to embrace the massive communication effort Noah represents. Noah is sure to hit audiences differently than reading Genesis verses 5:32-10:1

. But when there is literally nothing besides the Bible itself to confirm the story of the Ark and the Flood, a few changes are expected, inevitable, even justifiable. The story of Noah is just that—a story, not a history of Earth. Knowing what we now know about biology and geology and physics, it’s hard to argue that such a reboot wasn’t Aronofsky’s right as an artist, no matter what the Bible says. --