A revolutionary idea that could convert critics of these virtual worlds

On my computer screen, a jewel-encrusted bow points skyward, with an arrow pulled back and ready to fire. In the distance, I can see a bull’s-eye planted in front of a Himalayan landscape. Slowly I lower the bow until the arrow is fixed on the target. For a second, I overcompensate and the arrow points toward the ground. I catch my breath, pull the bow up, and then release. The arrow sails across the virtual terrain and lands with a small flash at the center of the bull’s-eye.

Here’s the catch: I’m not aiming that arrow with a joystick, or a keyboard, or a mouse. I’m aiming it with my mood. 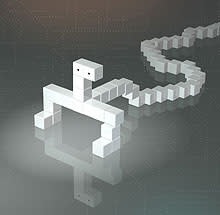 Technically, I’m directing the arrow by altering my physical state—the electrical resistance at the tips of my fingers and my heart rate. I’m hooked up to a biofeedback system: three sensors worn like rings around my fingers and wired into an ordinary personal computer. The sensors read the galvanic skin response of my fingertips and my pulse. Increased galvanic skin response and heart rate usually accompany active states of awareness, as in the sweaty palms of the fight-or-flight instinct. Lower levels suggest relaxation.

My virtual archery session is part of The Journey to Wild Divine, a new interactive CD-ROM that turns your PC into a device for focusing your energy and reducing stress. Wild Divine is technology designed to help you find an inner calm—a way to unwind in front of the computer, not away from it.

Playing Wild Divine involves exploring a lush 3-D world with waterfalls, elaborate gardens, spiritual guides, and a menagerie of grazing llamas and white wolves. The pace is reminiscent of the pioneering game Myst: slow and entirely free of violence. Solving puzzles or passing special tests allows you to enter new areas. A narrative begins to develop, although following the plot generally takes a backseat to exploration.

The real fun comes from those biofeedback sensors. Most important, the tests in the game require you to alter your physical state in a specific fashion—to slow your breathing and heart rate or to push yourself to become more alert. If you succeed in changing your state, you pass the test and can advance. Wild Divine uses the spiritual language of “energy flows” and “heart breath” to describe those changes, but underneath that vocabulary are real physiological events tracked by the sensors. The more you play the game, the easier it becomes to lower the electrical resistance of your fingertips on command. Once you’ve mastered that kind of self-regulation, you can translate it into the real world.

Of course, no one needs a computer linked to galvanic skin response sensors to ameliorate stress: Meditation and yoga can generate the same results. But biofeedback tools add external information to the mix. “You have this ancient technology in yoga and meditation that dates back thousands of years,” says Wild Divine creative director Corwin Bell, “but being in the scientific paradigm that we’re in, we want proof. I felt that yoga and mediation were really important tools, but I still wanted that printout at the end of the session to show me what was happening to my body.”

Enhanced self-control has always been the promise of biofeedback, but the systems have suffered from limitations. One is that representations of the physical state are usually spiked lines scrolling across a screen. As Bell puts it, “The problem I always had with biofeedback was the feedback.” Wild Divine feels more like the inside of a Nepalese temple than the inside of an emergency room.

The other traditional limitation with biofeedback has been the gear itself, which is typically bulky and expensive. By contrast, Wild Divine simply requires sliding three rings on your fingers and costs under $150. Bell’s colleague Kurt Smith, a biomedical engineer who financed the project, envisioned a system that would “help people with all of their health, not just ‘your heart’s not working properly—here’s a new contraption for it.’ We wanted to create something where people would go through this really entertaining, journeylike experience.”

The overall design of Wild Divine preaches to the converted, à la sacred temples and gardens. If you’re the sort who’s not inclined to dabble in Eastern philosophy, the game’s imagery may be a barrier. But even if you ignore the spiritual implications, there’s much to learn. It took me only about 30 minutes to learn how to drive my galvanic skin response levels at will; after that I found myself levitating virtual balls, opening massive oaken doors, and controlling the flight patterns of birds with relative ease.

Playing Wild Divine also made me more aware of the mental states that I brought to the game. Near the beginning of the journey, you’re asked to light a fire by breathing in sync with bellows that blow air on a pile of logs and kindling. The test is designed to teach the heart breath used by many Yogis to reach a state of balanced calm. Using a more Western language, Smith describes the state as one in which the sympathetic and parasympathetic systems of the body are working in sync with one another, without either one dominating. I found that lighting the fire was impossible in my overcaffeinated morning state. During my sleepier postlunch hours, I could generate a blaze in seconds.

A century ago, Swiss psychologist Carl Jung used a crude galvanometer and electrodes attached to patients’ hands to measure changes in electrical resistance on the skin of patients during various word-association experiments. Conventional lie detectors rely on the same basic technology.

Struggling to start that fire made me wonder what might happen if more software relied on biofeedback. We already use input devices to inform computers of our mental states: We click on documents we’re interested in; we scroll rapidly through text that bores us. What kind of software tools could be developed if the computer could sense a stressed-out, drowsy, or razor-sharp operator? Your to-do list might expand or contract based on how much energy you had that morning, and your e-mail program might caution you against sending out harsh messages if you were stressed. More traditional action games could use the technology too: Imagine having to keep your galvanic skin response levels low to survive a grueling interrogation session.

The most intriguing thing about Wild Divine is what happens when you take the sensors off. A number of recent studies have shown that playing conventional video games enhances visual acuity, as well as hand-eye coordination. Some education scholars now believe that many games on the market enhance children’s memory and logic skills, thanks to their complex puzzles and increasingly Byzantine rules. Bell and Smith propose a more challenging extension of the video games-can-be-good-for-you hypothesis: games that alter psychological—and physical—well-being, teaching the user to regulate internal systems without going on a Transcendental Meditation retreat or signing up for a yoga class. “The game is meant to be training wheels,” Smith says. “After you’ve played it, you should be able to say, ‘Oh, there’s that feeling of my stress levels going up, so I’m going to do this exercise that I learned from the game.’”

The idea of Wild Divine is appealing in a world where the Columbine killers became notorious for being avid players of the violent Doom games. After years of video games that encourage people to playact as Arnold Schwarzenegger, who wouldn’t welcome a game where you get to be the Dalai Lama?