When ordinary citizens complain about the titans of media abusing their power to shape public opinion, the complaint often revolves around the placement of a news item, not the story’s content. There may be no journalistic judgment call more crucial than the simple one of location: what story gets front-page treatment and what gets demoted to a short in the back of the D section. Until recently these decisions have been made by professional news editors. Now, however, the power to declare what news is most important is being eroded by the Internet. Dozens of online services allow you to create your own personalized front page with headlines arranged according to your interests—what some have dubbed the Daily Me.

Critics worry that so narrowly tailoring news to an individual’s interests could ultimately create an ideological hall of mirrors, with right-wingers reading only about the latest abuses by the teachers union and the ACLU, the left-wingers seeing nothing but stories about corporate greed and John Ashcroft. Just in time, an alternative to the echo chamber of the Daily Me has emerged. Instead of personalizing headlines to an individual’s taste, a new generation of online services track the interests of hundreds of thousands of ordinary users, building a front page from their collective interests. Call it the Daily Us. 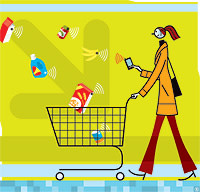 The emergence of these metaheadline sites raises a fascinating question: How is the news different when it is organized collectively by readers, not editors? Does it follow a race-to-the-bottom pattern, with tabloid intrigue and celebrity stalking dominating? Or does something more promising rise to the top? To answer that question, I spent a week analyzing a Web site called Technorati (www.technorati.com), comparing its headlines with the traditional ones served up by The New York Times and CNN.

Created almost as a whim by programmer David L. Sifry, Technorati is one of the sites that tracks links and commentary in the expanding world of Web logs, called blogs for short. Blogs are maintained by individuals, usually in their spare time. Most are composed of links to other Web pages, often with a dash of commentary attached. A Web logger, or blogger, will see an interesting item on the Middle East peace accords from Reuters, then post a link to it on his blog, adding a few sentences of endorsement or critique. Some bloggers update their sites dozens of times a day.

Technorati began as an exercise in high-tech navel-gazing. Sifry wanted to have a better way of knowing when other bloggers wrote about something from Sifry’s Alerts—his blog. So he built a tracking tool that scans Web logs, looking for links pointing back to Sifry’s Alerts. Then Sifry decided it would be interesting to track new links to other Web logs instead of just his own. At last count, Technorati was scanning the activity of more than 900,000 blogs, following more than 40 million active links.

Sifry uses the ever-changing links to compile a Daily Us that he calls Technorati Breaking News. “It’s pretty simple,” he says. “Imagine that each Web logger Technorati tracks is voting with his attention whenever he posts to his Web log. We track all of these people’s writings and treat each blogger as part of a massive collaborative news filter. There are about 4,500 professional news sources that Technorati has compiled on the Web, including The New York Times, The Washington Post, ESPN, and The Weekly World News. Whenever a Web logger links to a new article on one of those sources, that article gets a vote. When a new article gets at least three votes from different Web loggers, it goes on Technorati Breaking News.”

The end result bears a superficial resemblance to the automated Google news service that was unveiled in October 2002. But the two Web sites do not rank headlines the same way. If a large number of professional organizations run a particular story, it shoots to the top of the Google news page. Technorati, on the other hand, takes a more democratic approach. If The New York Times, CNN, and The Wall Street Journal all lead with a particular story but bloggers don’t find it interesting enough to warrant a link, then the story doesn’t make it onto Sifry’s Breaking News page.

So how do the Technorati headlines compare with the old-fashioned ones? On major news events—particularly those involving war, terror, political scandals, and celebrity deaths—the two approaches produce similar results. The week of my experiment was dominated by a major arrest in the war on terror: The New York Times and CNN both gave top billing to news of the arrest, and sure enough, the Technorati Breaking News list featured several prominent links to the story as well. One difference is that the Technorati links pointed to a more international range of perspectives (though usually in English). The list was as likely to point to the BBC as to CNN. And Sifry has detected an interesting 24-hour pattern. “The headlines reflect the countries where people are awake at the time,” he says. Think of those shifting headlines as an index of the planet’s attention levels rising and falling in sync with the sun.

The Technorati Web site features a Billboard-style listing of Web logs, or blogs, ranked by how many other sites are linked to them on the Internet. Possessing a high position on this chart is known as having “Technorati juice” and has become a badge of honor among bloggers.

More significant differences show up at the margins. Technorati places far more emphasis than traditional news outlets on opinion articles because bloggers seem just as likely to link to a firebrand op-ed essay as to a sober wire-service report. Jockeying for the top spot during my survey were a Europhobic diatribe from the New York Post, an almost mirror-image anti-American polemic from Britain’s Guardian, and a opinion piece on gay marriage and heterosexual divorce from the National Review. On any given day, hundreds of opinion articles are published by traditional news outlets online. Technorati lets you see something that was up to now practically invisible: which opinions are creating a buzz. You can think of it as the online version of Speakers’ Corner in London’s Hyde Park—not only can you hear the soapbox speakers, you can also tell which ones have attracted the largest crowds.

“News of the weird” color stories also fare well on Technorati. During my survey, the top of the headline charts included a story about an attempt to set a world record for toppling dominoes that was foiled by a wayward cockroach. “Weird news is easy to link to and make funny comments about,” Sifry explains. “In the sense that lots of Web loggers are passing around all types of ideas and memes, it’s not uncommon for people to make simple, clear comments about weird news—it doesn’t require much effort to make fun of something silly or stupid.”

Despite its populist underpinnings, the Technorati list is mostly free of the celebrity pseudoevents that dominate television journalism. Because the blogging world is more technically minded, a new Microsoft Windows security breakdown is more likely to be an important story than Ben and J. Lo’s latest spat. Of course, the Technorati headlines may fill up with celebrity gossip as blogging becomes more of a mainstream activity, but in the meantime, the lack of “personality stories” is a refreshing change of pace.

On the whole, Technorati-and the legions of bloggers it tracks-have a remarkable knack for picking up on stories that make great cocktail party conversation. These are relevant but also a little offbeat. One day during my survey, for example, the lead item on Technorati was a report that Arnold Schwarzenegger’s films could not be shown on TV before the California recall vote, because that would violate FCC campaign regulations limiting candidate airtime. That may not have been the most important event of the day, but it’s precisely the kind of quirky story that gets attention at the watercooler.

No, Technorati’s Breaking News isn’t a replacement for the traditional front pages or nightly news broadcasts. But neither does it create the narrowing perspective of the Daily Me. It’s more like an ongoing exchange between the top-down approach of traditional journalism and the bottom-up approach of the Web: Professional writers and editors generate the stories, and the Web’s vast audience decides which ones deserve our attention. And this approach may well result in the best of all possible journalistic worlds. The last day of my anecdotal survey, the lead story on Technorati wasn’t another item on Iraq or an exposé on Madonna’s new yoga instructor. It was a 3,000-word rumination from the Financial Times on the question of why humans cry, examined both culturally and biologically. It was hands down the most interesting article I had read all week. Somewhere I had an editor and a writer to thank for producing the story, but I also had another group to thank for finding this one among the clutter and sharing it: the distributed eyes of the Daily Us.