Edward Snowden, the NSA, and the Never-Ending End of Privacy

The unprecedented government surveillance that surfaced in the summer brought the perennial clash between technology and privacy to a new level. 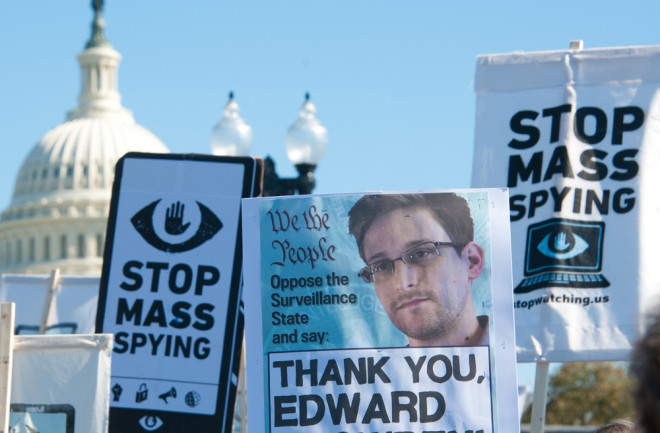 Samuel Warren and Louis Brandeis, writing in the Harvard Law Review, expressed concern over privacy infringements threatened by new technology: “Recent inventions and business methods call attention to the next step which must be taken for the protection of the person, and for securing to the individual . . . the right ‘to be let alone,’ ” they wrote.

The year was 1890, and the inventions Warren and Brandeis cited were “instantaneous photographs” and devices for “reproducing scenes or sounds.” Those innovations now sound quaint, but the concerns they raised are fresher than ever.

Americans still have legal protection for their most private communications — what they say and write to other American citizens — but how important is that protection in light of the government’s vast ability to collect data about almost every aspect of people’s daily activities?

As the scope of Snowden’s revelations expands by the day, the picture looks increasingly ominous: The NSA collects records of phone calls going back years. It patrols Internet cloud services. Your Facebook chats, your Skype calls, your Gmail messages can all be monitored.

The ironies are rich. Warren and Brandeis fretted over a shutterbug snapping pictures of an unsuspecting woman, while Sprint’s recent iPhone 5 commercial touts a “billion roaming photojournalists uploading the human experience.”

The introduction of Google Glass, the wearable computer with a head-mounted display that lets users record everything, may make personal surveillance nearly ubiquitous.

Technology has long driven fears. In the mid-1970s, Congress held a hearing to discuss ARPANET, a Pentagon project that some considered a frightening assault on privacy because it could create vast files on individuals by networking computers. Those concerns were soon eclipsed by public support for ARPANET’s successor: the Internet.

In 2002, the Pentagon took heat over the Total Information Awareness program, which New York Times columnist William Safire called a “supersnoop’s dream” that would create a “computerized dossier on your private life” based traffic and has access to most of the major email, chat and on commercial and government information.

When the program was canceled, the public largely lost interest despite reports that it merely moved to the covert world. But while data mining a decade ago was concerned about cross-matching, say, travel reservations with immigration records, what Snowden revealed in 2013 was something far more ambitious.

The documents demonstrated the NSA can and often does decrypt, hack and access almost any device or service used by private citizens.

What has enabled the government’s increasing ability to monitor our lives is not exotic spy technology but commercial technology embraced by Americans. We upload pictures to Instagram, provide information about friends and family to Facebook and store private letters on Gmail.

Even those who don’t broadcast their thoughts on Twitter provide reams of data mopped up by commercial companies. News read online is logged, purchases are tracked, and website visits are recorded.

There is, thanks to the spread of Internet access and smartphones, more information on our daily lives than could have been imagined even a decade ago: We Google our aches and pains and stalk our former lovers, leaving a virtual trail of our daily movements simply by carrying a cell phone.

That data, recorded by commercial companies — be they cell phone and Internet service providers or your favorite social media — can be intercepted, hacked or secretly requested by the government. People may think they have control over personal information by, say, disabling location services on an app, but that’s not always the case, says Kalev Leetaru, a fellow in residence at Georgetown University and an expert in big data.

“We never really think about it with a cell phone,” says Leetaru, pointing to the ability to trace a user’s location by tracking cell towers, essentially “leaving digital bread crumbs wherever you go.”

Today’s surveillance issues emerge from a clash of technology and policy. Companies encourage us to store our music, pictures and email in the cloud, but most people aren’t aware of what this means for privacy. A letter sitting in your home is covered by the Fourth Amendment protection against unreasonable search and seizure, but that same letter in your Gmail, if sent and read over six months ago, is not afforded the same protection.

Similarly, even when the content of our communication is protected by law, Snowden has demonstrated that metadata — the who, what, where and when of communications, encoded in our messages, calls and online activity — is fair game.

The NSA may not be allowed by law to listen to your call to a friend, but the government can collect information about how many times you called that friend, how long the calls lasted and on which dates. And then they can use data mining to cross-match the relationship to your friend’s friends, essentially tracking your entire social network, like an involuntary version of Facebook.

One of the problems, says Paul Rosenzweig, a former Department of Homeland Security official and expert in data mining issues, is that people focus on content — what they actually say on the phone or in an email. What Snowden has brought to public debate is that as technology has expanded the amount of metadata being generated, the debate itself may need to change.

“Metadata is more robust and detailed than content,” says Rosenzweig. “It may be we’re reaching a point where metadata is content. That would be a very big sea change.”

[This article originally appeared in print as "The Never-Ending End of Privacy."]