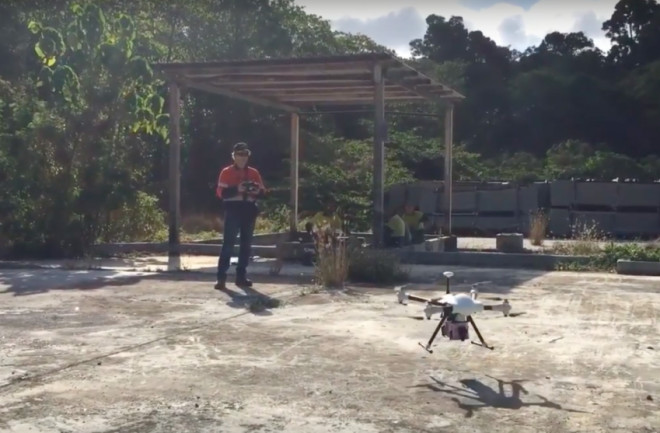 Australian wildlife officials tested small drones as a possible way to drop poisoned cat bait on Christmas Island. Credit: Department of Parks and Wildlife, Western Australia In the land down under, feral cats slaughter an estimated 75 million native animals each day. That threat to biodiversity prompted the Australian government to declare it would kill 2 million feral cats over five years starting in 2015. As part of that campaign, officials plan to enlist a drone air force capable of dropping poisoned cat bait on the Australian territory of Christmas Island. During flight tests last year, a Sky Hero drone performed airborne drops of cat bait that resembles breakfast sausage links made from kangaroo meat. That proof-of-concept test showed how drones could deliver cat bait to target areas at a cost three times cheaper than hiring manned light aircraft. Starting as soon as next year, wildlife officials could use unmanned aerial vehicles (UAVs) to drop toxic bait as part of the final phase of a plan to wipe out all feral cats on Christmas Island—a distant Australian territory located 2,650 kilometers northwest of the Western Australian capital of Perth. "We are looking to incorporate UAVs into the 2018 control program," says Mike Johnston, senior project officer for the Department of Parks and Wildlife - Western Australia. https://www.youtube.com/watch?v=w1VTOeNljXU&feature=youtu.be This may sound harsh to cat lovers. But feral cats have proven one of the deadlier menaces for wildlife worldwide by contributing to at least 14 percent of vertebrate extinctions recorded by the International Union for Conservation of Nature. They first gained a foothold on Christmas Island during the first British settlement of the island in 1888, and have since grown into a serious threat for native island species that never evolved to deal with such predators. Christmas Island's feral cats frequently dine on native species such as the emerald dove, the Christmas Island hawk-owl, the Christmas Island thrush, Lister's gecko and the pink blind snake. That is why wildlife officials have targeted the feral cats—along with black rats—for elimination through a three-step program. They have already completed the first two program stages by banning importation of new cats, using a veterinary program to desex and implant microchips in all pet cats, and removing all stray or feral cats within human residential, commercial and light industrial areas. The Sky Hero drone was tested as part of preparation for Stage 3 of the Christmas Island plan. Equipped with eight motors, the drone carried non-toxic bait loads of 30 sausages during each test flight lasting between 8 and 14 minutes. Despite the relatively short flight endurance, the drone was able to carry out three bait drops at each of five test locations on Christmas Island. Human ground crews moved in afterward to check that enough baits had fallen through the rainforest canopy to become accessible for feral cats (and to make sure the local land crabs had not carried off too many baits). Overall, the test drops were deemed a success with about 88 percent of 448 baits falling in areas where feral cats could theoretically reach them. More details can be found in an article published online in the 29 August 2016 issue of the Journal of Unmanned Vehicle Systems. https://www.youtube.com/watch?v=ibD8_IjpbVs Drones would just be the latest weapon deployed in Australia's war on feral cats. Cage-trapping and poison baits represent some of the more typical methods. One ecologist developed a robotic trap that sprays feral cats with poison when it detects them, so that the cats later end up ingesting the poison due to their natural grooming habits. Despite some outcry from animal welfare activists, Australia's government seems adamant that it must continue to cull the feral cat population in order to save local animals. It pointed out that trapping, neutering and releasing millions of feral cats across seven million square kilometers of the Australian continent would be impractical and would not offer immediate relief for local wildlife. "Returning neutered feral cats to the environment to keep killing and driving extinctions would be inhumane and unjustifiable when the alternative is for them to be humanely euthanized," according to an Australian government FAQ. "Trap, neuter and release would be highly stressful for millions of feral cats, transported as wild animals in cages in remote and hot conditions across thousands of kilometers to be neutered and then returned to the wild."