Drones Get Grabby With an Origami Arm 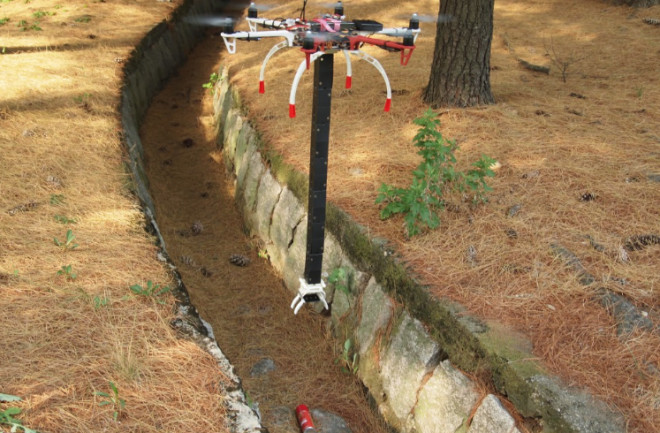 We all know drones offer unique views from above, but give ‘em a hand and they can do a whole lot more. With a functioning arm they could better enter tight areas or lend a hand in gathering samples.

Taking inspiration from origami, a team of researchers from Seoul National University in Korea created a deployable arm that easily attaches to a drone and unfurls when needed. In the past, origami-inspired designs were limited because they aren’t exactly structurally sound. Researchers, however, found a way to make arms both fold-able and stiff.

The arm is made of seven stacked actuators, which are basically hollow 3D rectangles that weigh about 1 ounce and are almost 4 inches long. All together, the extender weighs about half a pound.

When folded, it’s about 1.5 inches long and can extend to almost 28 inches. A motor wired through the actuators controls the folding and unfolding. And I have to say, that arms unfolds pretty seamlessly.

Though, scientists ran into a few issues when trying to make the arm longer and it only goes straight down. Add some more length and the ability go in more directions, then we’ll really be talking. Hopefully the kinks can be worked out — with an attached grabber or gimbal camera, this arm could help drones inspect chimneys, pipes, bridges, and even gather samples in terrain not easy for scientists to reach.

The research was outlined in a paper released Wednesday in Science Robotics.