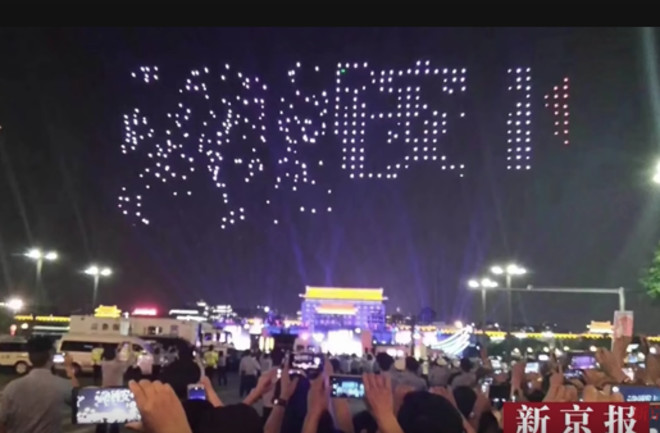 Some of the drones just didn't feel like dancing in formation. (Beijing News/YouTube) Drones have flown over blowholes and detected heartbeats from the sky. They’re also good entertainers. Ehang, Chinese drone manufacturer known for its autonomous flying taxi, flew 1,374 drones over the Xi’an City Wall. The company reclaimed the Guinness World Record for the “most number of unmanned aerial vehicles airborne simultaneously.” The drones danced into 16 formations, including the Xi’an City Wall, the Silk Road and the number 1374. But the performance wasn't perfect. While the drones were airborne, they failed to complete all the formations. In fact, they were a mess for a good chunk of the 13-minute show, according to the South China Morning Post. https://www.youtube.com/watch?v=YQK6_2Brnqk Ehang has yet to say what caused the drones to defy their overlord — an AI formation command system. Prior to the show, the CEO of Ehang Egret, an affiliate company that oversees the drone light show division, said cell phone interference from the more than 100,000 attendees could affect the drones. The tech that allows these drones to autonomously move into pre-planned formations is complex and precise localization is necessary.

Aerial light shows aren’t new, by any means. Intel, with its shooting star drone, has established itself at the forefront of drone light shows. In 2016, Intel set the first Guinness World Record for the most drones flying simultaneously. It flew 100 drones and later broke its own record by flying 500. Since then it's been a bit of back and forth between Intel and Ehang, as the Chinese company wanted a piece of the action. Smaller companies are also deploying dancing drones for events in the U.S. Here are some more light shows that have wowed audiences over the past couple years. Odesza at Coachella https://www.youtube.com/watch?v=82SDsv2iJrU The person who posted the above video described Intel's Coachella 2018 drone show for Odesza as "bonkers". The first Coachella drone show was in 2017 when hundreds of Shooting Star drones lit up the sky above centerstage in-between sets. Optimus Prime Premiere https://www.youtube.com/watch?v=uV6mOAW7GxM Illuminating massive logos or characters makes drone light shows ideal for marketing and advertising, which both Intel and Ehang have done. In China, Ehang's drones created Optimus Prime for the global premiere of “Transformers: The Last Knight” (above). In Los Angeles, 300 Intel drones promoted the release of "Wonder Woman." Intel 100 https://www.youtube.com/watch?v=eZ-js5zn-I0 In 2016, Intel 100 is really what started it all.