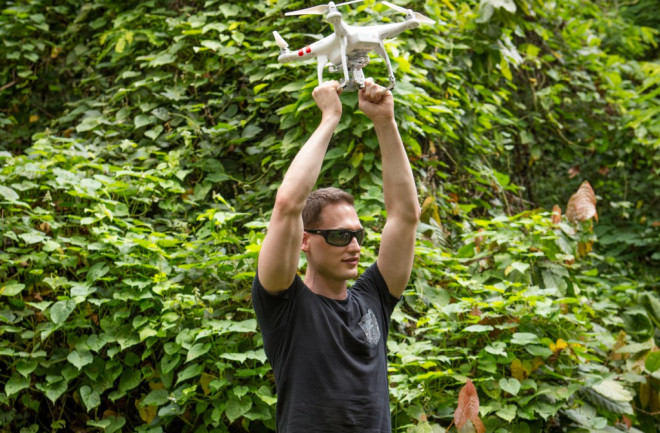 Project Premonition lead Ethan Jackson holds a drone during a feasibility study in Grenada earlier this year. (Credit: Microsoft) Drones will play a key role in an ambitious project that aims to predict future disease outbreaks. Microsoft researchers are developing a high-tech system to autonomously capture and monitor the most notorious carriers of disease: mosquitoes. The effort, called Project Premonition, would combine drones, data analysis and molecular biology to detect infectious diseases before mosquitoes get a chance to spread them to wider populations.

Project Premonition is still several years out from becoming reality, but researchers have charted a course to achieve their goal and recently conducted a feasibility study in Granada. First off, they are improving the design of mosquito traps, which have remained mostly unchanged for over 50 years. Current mosquito traps are highly inefficient: Researchers need to traipse through remote jungles to retrieve them; the chemicals used to lure mosquitoes into the trap are difficult to ship around the world; and the old-school traps indiscriminately collect every bug, forcing entomologists to spend hours sorting through hordes of bugs by hand.

The new trap prototypes use a different method to entice mosquitoes, and each trap contains sensors that can store mosquitoes, but toss out any other bugs. They sound like small improvements, but they could save researchers countless hours in the lab. The next step, researchers say, is to use deep genetic sequencing to sift through mosquito samples and look for multiple viruses, including ones that haven’t been discovered. Once they’ve gathered troves of genetic data, it’ll all be stored in a cloud-based database that forms the raw material for sophisticated algorithms to evaluate which virus strains pose a threat to humans or animals.

Bring on the Drones

In order to obtain all the crucial genetic information from mosquito samples, researchers will need to collect them more efficiently. Finally, we get to the role drones will play. Project Premonition researchers will rely on drones to quickly transport their high-tech traps from the lab to remote locations, and vice versa. But rather than depending on a pilot, researchers plan to design drones that carry out their transport duties autonomously. That means designing drones that can navigate autonomously, while also avoiding obstacles in their environment like trees and people. If all the pieces come together, Project Premonition would operate like a well-oiled, semi-autonomous disease-detecting machine. Ultimately, researchers would like to scale up the system so that traps, drones and data would work around the globe to continuously monitor infectious agents as they move around the planet. This would help scientists keep a close eye on diseases, and intervene before they become a serious problem.