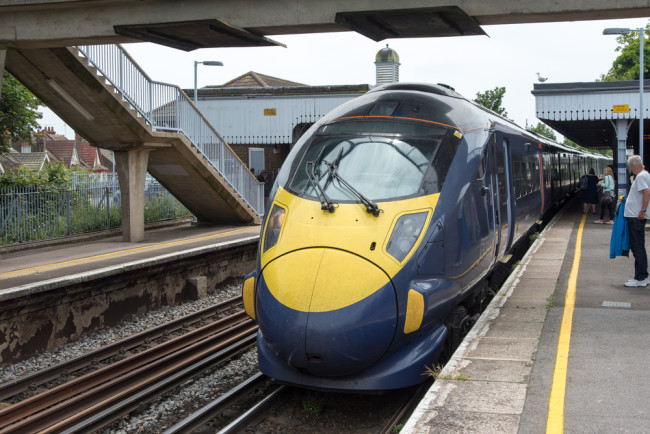 Multi-taskers aboard passenger trains in the United Kingdom could someday post a Facebook update or upload a Google doc with the help of a drone. Earlier this year, U.K. Prime Minister David Cameron announced a new initiative to boost mobile connectivity and provide free Wi-Fi access aboard the trains of four major companies that, combined, account for more than 500 million journeys annually. The government has contributed $78 million (£50 million) to fulfill its pledge, but how exactly trains will become Wi-Fi hotspots remains an open question. That’s where drones come into the picture.

Sitting aboard a train is a perfect time to get some work done, but life on the rails isn’t exactly 4G-friendly. Tunnels, trees, and thick metal train carriages make it quite difficult to maintain a reliable signal from point A to B. "Dropped calls and intermittent access to the internet are frustrations felt by many rail passengers,” U.K. rail minister Claire Perry has said. In June, the U.K. government launched an open consultation to gather ideas on how to boost mobile network coverage across the country’s rail network. The consultation summary includes 10 on-train and off-train proposals to boost signal. Using drones or tethered balloons represents one of the more innovative approaches, although it may not be the most realistic of the bunch.

To deliver signals to trains, drones would fly alongside trains to deliver “targeted connectivity” to train passengers. Balloons tethered to trains could also do the trick, and Boeing recently patented a system — unrelated to this issue — that gives you an idea of how that might work. In addition, Facebook and Google have recently been investigating drones and balloons as means of providing internet access as well. Other, perhaps more realistic, solutions include adding Wi-Fi antennas to train roofs, forcing mobile firms to improve their coverage, or adding onboard technology that boosts 4G signals. The U.K.’s consultation period for railway connectivity ends July 13. Here at Drone 360, we hope officials take a long look at the unmanned aerial vehicle option.