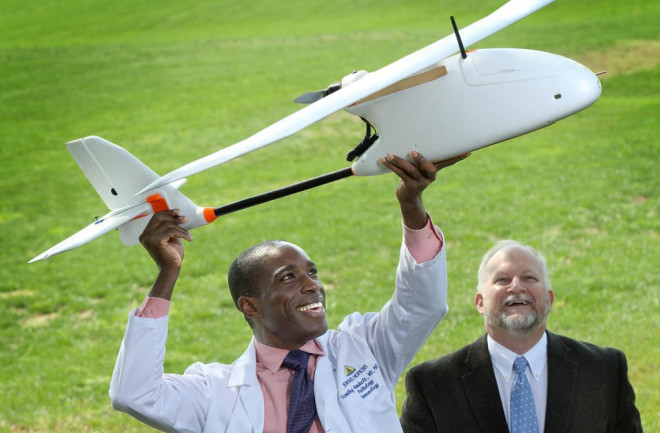 Pathologist Timothy Amukele, left, teamed with Robert Chalmers and other engineers to create a drone courier system that transports blood to diagnostic laboratories. (Credit: Johns Hopkins Medicine) Drones, it appears, can safely deliver precious cargo. Biological specimens, like blood samples, require a smooth ride to the laboratory; excessive turbulence can skew test results. This poses a unique problem for doctors practicing in rural, rugged landscapes around the world. But scientists at Johns Hopkins University, for the first time, proved that hobby-sized drones could handle this important task.

Blood samples are one of the most important tools doctors can use to decipher what’s ailing their patients. In urban areas with smooth roads leading to the diagnostic lab, blood work is pretty simple. However, for the millions of people around the world living in isolated areas, or in underdeveloped nations lacking passable roads, blood work is trickier. When samples are jostled around too much, blood cells can die or begin to coagulate, which makes it difficult for doctors to run tests and gather reliable information. Not even pneumatic tubes, like the ones at banks, are suitable for transporting samples. The ride is far worse in a vehicle bouncing over the rough landscapes of Earth’s backcountry, and sending samples via airmail is quite expensive. Doctors, therefore, wanted to see if drones were up to the task.

Johns Hopkins doctors tested a drone delivery method by first collecting six blood samples from each of 56 willing volunteers at Johns Hopkins Hospital in Baltimore. The samples were driven to a flight test site where half of them were loaded into a hand-launched hobbyist drone, which was flown around for 40 minutes. The other half remained in the vehicle. All the samples were then reloaded into a vehicle and driven to a diagnostic lab to undergo 33 of the most common blood tests. There was no noticeable difference when doctors compared the results from samples that were flown versus samples that remained grounded. The results, published Wednesday in the journal PLOS One, are proof-of-concept that drones can provide a gentle ride for important specimens. The next step, doctors say, is to launch a pilot study in Africa (their test flight took place in the United States) to see if drones can transport samples from the bush to labs that are often more than 60 miles away from where doctors collected the sample. It's yet another addition to growing list of jobs drones are well suited for.