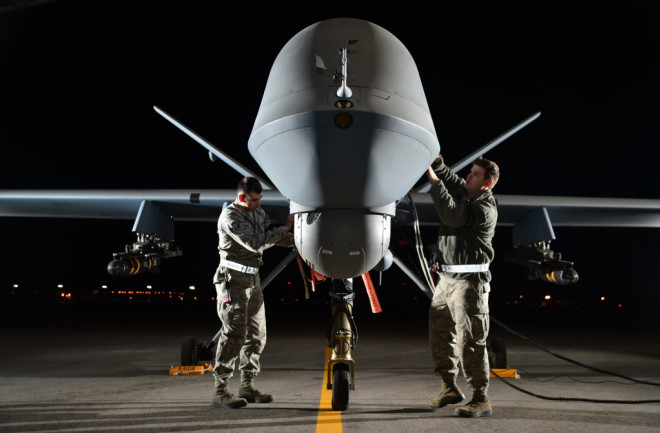 Airman 1st Class Steven (left) and Airman 1st Class Taylor prepare an MQ-9 Reaper for flight during exercise Combat Hammer, May 15, 2014, at Creech Air Force Base, Nev. Credit: U.S. Air Force photo/Staff Sgt. Nadine Barclay Drone pilots represent one of the most crucial and under-appreciated elements of the U.S. military's operations across the world. They provide hours of support in watching over U.S. troops on the ground, searching for enemy targets and sometimes launching missile strikes. But the new age of robotic warfare is straining human limits — the U.S. Air Force fears that the growing demand for having more drones in the air around the clock is pushing its drone operators to the breaking point. The Air Force has struggled to train enough pilots to remotely operate its MQ-1 Predator and MQ-9 Reaper aircraft for years. It has scrounged for new pilots by partially cannibalizing its training squadrons and by keeping manned pilots on drone operator duty for years beyond normal Air Force assignments. The existing group of military drone operators has received less time off and has suffered in its chances for promotion because ongoing operations have kept operators too busy to take military education courses. Now an internal Air Force memo acquired by

has revealed fears that the Pentagon's demand for more drone patrols will drive exhausted drone operators to quit and make it difficult to recruit new replacements. "It's at the breaking point, and has been for a long time," a senior Air Force official told The Daily Beast. "What's different now is that the band-aid fixes are no longer working."

The Joint Chiefs of Staff — the most senior military leaders advising the U.S. Secretary of Defense — want to boost the number of drone combat air patrols (CAPs) from 61 to 65 as soon as April 2015. Each CAP requires four drones to provide 24-hour coverage over locations such as Afghanistan, Yemen and North Africa.

But a CAP also needs people — 186 people, to be exact. Fifty-nine people launch, land and repair the Predators at airfields near the actual combat zones, in places such as Afghanistan, Pakistan and Djibouti. Forty-five CAP members live and work at an air base in the United States, flying the drones via Ku-band satellite. Another 82 people scattered across the U.S. pore over the video imagery the robots acquire and forward it onward to intelligence officials and front-line commanders.

Such increased demand has driven a huge leap in the numbers of U.S. military drone operators over the past decade or so. There were just around 50 military drone pilots in the late 1990s. That number has grown to more than 1,300 drone pilots as the U.S. military became involved in Iraq, Afghanistan and other parts of the world in the expanding War on Terror. The growing tempo of drone operations has also left many drone crews tired and unhappy — especially when the Air Force initially treated the human crews like robots expected to work 12-hour shifts, six days a week, without fully briefing them on the purpose of their assigned missions. Morale hit a low point around 2005 or 2006 when a group of Predator pilots, sensor operators and maintenance crew members booed their commander during a meeting, according to War Is Boring.

No satisfaction for drone operators

The Air Force has scrambled to improve the morale of its drone crews since that low point. But the growing demand for drone operations and the limited number of pilots and crews has continued to strain human limits. Investigators from the U.S. Government Accountability Office published a report on Apr 10, 2014 that included troubling findings from focus groups held among drone pilots.

The problem of lower promotion rates and career advancement was also identified by both the GAO report and a Brookings Institution report authored by U.S. Air Force Colonel Bradley T. Hoagland last year. Longer work shifts for drone pilots mean that they have less time than their manned pilot counterparts to complete military education requirements needed for promotion. In the last five years, promotion percentages for drone pilots from the Air Force's Majors Promotion Boards have fallen from 96 percent to 78 percent. By comparison, typical Air Force officer promotion percentages range from 96 to 91 percent.

Carrying out war from home

Staff Sgt. William aims a laser onto a target during the third annual 432nd Wing’s Wing Hunt competition June 30, 2014, at Creech Air Force Base, Nev. Credit: U.S. Air Force photo/Tech. Sgt. Shad Eidson But the most widespread issue raised by the GAO report's focus groups was being deployed on-station — a curious sort of limbo existence that means drone pilots often get to go home to their families every day after spending their work hours supporting U.S. troops engaged in life-or-death situations on faraway battlefields. In the GAO report, 10 out of 10 focus groups said that such on-station deployment negatively affected their quality of life. The challenge of on-station deployment comes from the daily cognitive dissonance of living a double life that can't be discussed with spouses or children because of security reasons. Drone pilots said they experienced challenges in balancing their military duties with their personal lives for years at a time. Many said they would have preferred to deploy-in-theater for 6 months with a clear end point and endure the clean separation from family and friends rather than go through on-station deployment for 3 or more years. U.S. military members have only occasionally encountered such scenarios in the past. Historian T.R. Fehrenbach described a similar situation that took place during the Korean War of the early 1950s in his book "This Kind of War.”

The early months of the war were fought under weird circumstances by the American fighter and bomber pilots. Based in Japan, which never changed from peacetime ways, many of them had wives and family stationed at their fields. Many a pilot flew out in the predawn darkness to strafe and rocket enemy troops all day across the burning hills of Korea, then returned to play cards with his wife at night. This was harder on both pilots and family than if the dependents had been an ocean away.

On top of everything, drone pilots still struggle to receive respect from within the Air Force and from the rest of the U.S. military. The average drone pilot may contribute more to combat operations in a day than many manned fighter pilots do in a year, and the growing demand for their services is clear. But the fact that drone pilots don't expose themselves to the threat of bodily harm like a soldier or Marine on the ground — or even pilots flying manned fighters and bombers over battlefields — means that their contributions are sometimes overlooked or even dismissed within the U.S. military. Peter Singer, a strategist and senior fellow at the New America Foundation, described one such case while formerly at the Brookings Institution.

Let's use the case of the mission that got the leader of al-Qaida in Iraq, Zarqawi. So there was a team of unmanned aerial systems, drone operators, that tracked him down. It was over 600 hours of mission operational work that finally pinpointed him. They put the laser target on the compound that he was in, this terrorist leader, and then an F-16 pilot flew six minutes, facing no enemy fire, and dropped a bomb — a computer-guided bomb — on that laser. Now, who do you think got the Distinguished Flying Cross? The people who spent 600 hours, or the six-minute pilot? And so that's really what we're getting at.

The bias against drone pilots is clear even within the Air Force's struggle to recruit more such pilots. Few manned aircraft pilots voluntarily make the move to become drone pilots, even if the Air Force has assigned some to temporarily fill the ranks of drone pilots. Squadron leaders often send their lowest-skilled pilots to join the ranks of drone operators if requested. Overall, the Air Force recruited just 110 new drone pilots in the fiscal year 2013— falling short of its goal of recruiting 179 pilots by about 39 percent. In a broad strategic sense, U.S. civilian and military leaders clearly see great value in having a fleet of military drones that can carry out surveillance and strikes across the world. But the entire effort depends upon an overworked, under-appreciated group of pilots of whose human limits will still constrain the future of robotic warfare.