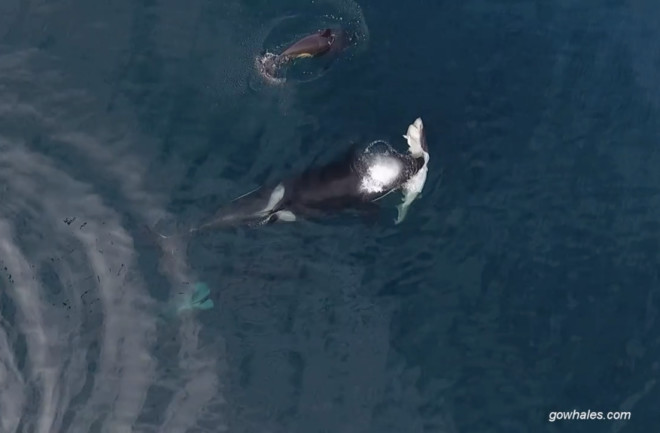 To killer whales, sharks aren’t all that fearsome. They’re more of a snack.

A drone pilot recently captured this video of four killer whales — two adults and two juveniles — chowing down on a still-living shark off the coast of California. They appear to be offshore killer whales, a sub-species that usually spends time far from land, making any glimpses of their behavior a rare treat.

Photographer Slater Moore shot the video as part of a whale-watching trip in Monterey Bay. He sent the drone aloft after realizing the whales had nabbed some prey and were in the process of eating it. The shark is still obviously alive at the beginning of the video, you can see it attempting to squirm itself loose from the massive jaws of one of the adults. The whales pass their prey back and forth a few times, presumably to make sure everyone gets a bite, and a few other whales show up later on to get in on the easy meal.

The unlucky catch was probably a sevengill shark, according the The Verge. It was about five feet long, although the species can grow up to twice that size. Still, in the jaws of a killer whale, the fearsome predator looked more like a toy.

The habits of offshore killer whales are not very well known — indeed, the sub-species was only discovered in 1988. They seem to congregate in large packs, and migrate all along the western coast, often ranging far out to sea. That they eat sharks was known from dead whales that have washed ashore with pieces of shark in their stomachs. They also feed on fish and squid, much like other killer whales.

There’s not currently enough data to determine if killer whales are in danger, although their populations are likely in decline. Monterey Bay Whale Watch, the company leading the tour this footage came from, notes that the whales often have dangerous levels of pollutants in their bodies, the consequence of sitting atop a food chain that ingests harmful chemicals in increasingly significant quantities.