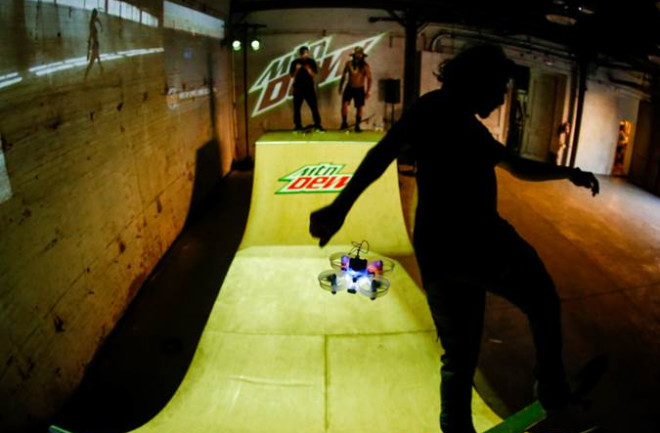 A tiny toy version of a racing drone, called Little Whoop, flies around skateboarders at a DR1 promotional event for drone racing. Credit: Alexander Robertson Tiny drones capable of fitting in the palm of a human hand zoomed around skateboarders doing ramp tricks inside a converted Brooklyn warehouse. The scene might have been mistaken for an underground gathering except for the club-style lighting, large Mountain Dew logos projected on the walls, and a DJ pumping music throughout the cavernous space. The "Day of Drones" promotional event was advertising an upcoming drone race hosted by DR1 Racing, one of several organizations hoping to make drone racing into the next big mainstream sport with televised racing championships and corporate sponsors. The human pilots who control the racing drones wear first person view (FPV) goggles that allow them to see the forward view from a tiny camera mounted on their drones. The resulting experience can seem like a pod racing scene out of "Star Wars: The Phantom Menace" or the speeder bike chase from "Return of the Jedi," especially when the drones race through custom-built racetracks with glowing lights. As a result, drone racing attracts a mix of real-life daredevils, gamers and tech enthusiasts who typically build their own racing drones to maximize flight performance and speed. Even first-timers got the chance to try flying tiny toy drones—smaller than the typical racing drones—during the DR1 Racing event held at the 1896 Studios in the Bushwick neighborhood of Brooklyn, New York on Aug. 3. "I like to jump out of airplanes, I like to drive cars really fast, ride motorcycles, anything that my mom says would kill me," said Chris Thomas, founder and CEO of MultiGP, during a panel discussion at the "Day of Drones" event. "Those things that are fun are usually dangerous... I finally found something that's really fun but not really dangerous." Corporate sponsors and media networks have already begun throwing their support behind drone racing in the attempt to transform the niche hobby into a mainstream activity. DR1 Racing has the sponsorship of Mountain Dew and broadcast partners such as Discovery Channel and the live-streaming online video platform Twitch. But DR1 Racing is not the only organization trying to make drone racing big. In an unrelated venture, ESPN signed on to televise the 2016 U.S. National Drone Racing Championships that took place on Governors Island in New York City from Aug. 5 - 7. https://www.youtube.com/watch?v=XnutpyvMiUE

The Challenges of Watching Drone Racing

But drone racing faces some major hurdles in becoming a mainstream sporting event. Drone pilots prefer standard-definition video streaming from the drone cameras to their goggles to minimize lag, because any delays in what they see can quickly result in their drone crashing into a course obstacle or losing precious seconds. By comparison, spectators naturally want to see drone races in streaming HD video, which places a heavier data load on the wireless networks and can create the lag issues that pilots fear. Drone racing can also be tricky to watch live in person because of the difficulty in seeing the actual drones whizzing around the racetrack. DR1 Racing has tried to boost the thrill of spectators at its events by having part of the race course go through the crowd, so that people can feel the rush of drones flying past at 80 miles per hour. But as Jacob Templin and Mike Murphy observed in a Quartz feature on drone racing, people may prefer the alternative viewing experience of seeing what the drone pilots see on their home tablets, laptops and TV sets—or possibly virtual reality goggles in the future. Another challenge is to give viewers a clear understanding of where all the drones are on the racecourse at any given time, said Jesse Perkins, a drone pilot on Team Big Whoop. He suggested that some sort of visual display is needed to show the location of each drone and give viewers a sense of which drone is in the lead. (Perkins is among the many drone pilots competing in the National Drone Racing Championships being shown on ESPN.)

Can Drone Racing Become a Sport?

Drone racing's first-time appearance on ESPN is certainly a big step in terms of publicity. It will not necessarily give drone racing the official stamp of approval as a "sport," but it could help pave the way for mainstream acceptance of watching drone racing in the same way that ESPN first began airing poker tournaments. The network has already been pushing the boundaries of its coverage in other ways beyond drone racing; it has recently focused much attention on the various video game tournaments of eSports. That question of whether drone racing can achieve professional sport status came up during the panel discussion at the DR1 Racing promotional event. Chris Thomas, head of the MultiGP organization that helps coordinate and encourage local drone races, suggested that drone racing can never achieve more mainstream success unless more people actively get involved in flying racing drones for fun. Otherwise they would be more likely to see drone racing as something like a circus experience without getting to experience the thrill of flying drones firsthand. https://www.youtube.com/watch?v=pZ0viMxYDA4 Most racing drone pilots don't get paid a regular salary for doing what they do, said Jordan Temkin, a pilot on Team Big Whoop. Instead, most only have the option of winning prize money at drone racing events. Sometimes that prize money can be a lot; the World Drone Prix held in Dubai on March 21 awarded a total of $1 million in prizes to the top drone racing teams. But the vast majority of drone pilots still come away from such events empty-handed. "I know about two dudes out of hundreds or thousands of pilots who get paid right now," Temkin said during the DR1 Racing panel. "Until we get paid to be the best drone racing pilots, we're not pros."