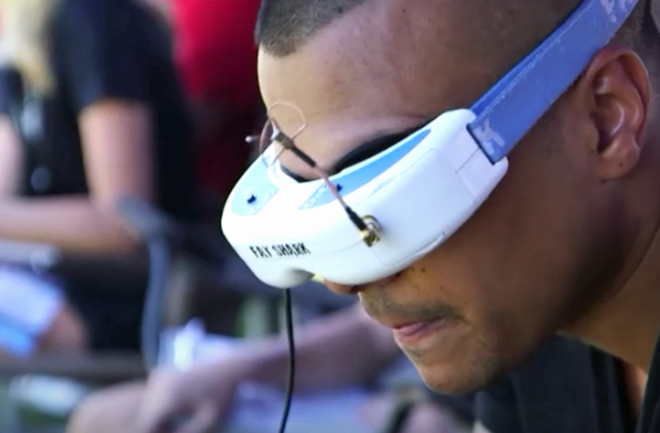 (Credit: Screengrab from Tested/YouTube) First-person view (FPV) drone racing is about to enter the big leagues. The owner of the Miami Dolphins, Stephen Ross, is investing $1 million in the Drone Racing League, a New York-based startup that will host its first public race event later this year. The league plans to earn money through ticket sales, sponsors and other media.

FPV racing is a high-paced sport that requires nimble thumbs and reactions. The sport’s popularity is evident in the countless videos that have popped up on the Internet showing the action from a drone’s onboard camera. If you aren’t familiar, participants strap on virtual reality goggles and maneuver their drone via live video from its camera. Typically six racers participate in each race, and like other flight competitions, participants need to navigate through various obstacles on the course. The fastest drone wins. Drone racers typically fly in the “250 Class” of drones, which can reach speeds of 70 miles per hour. Racers in the newly funded league will race similar models, the Wall Street Journal reports.

But while the drone videos online attract millions of eyeballs, seeing the sport in person isn’t exactly a spectacle. The drones are rather small and moving at incredibly high speeds, so you’re not going to see much from the grandstand – though you’ll of course hear the things. The first-ever U.S. Drone National Championships were held at the California State Fair in July, but only an estimated 60 people showed up during the two-day competition, according to The Verge. The trick for Ross will be to package Drone Racing League events in a way that will put people in the seats. Broadcasting real-time video of what each pilot is seeing during a race may be one way to overcome that hurdle. Regardless, FPV racing is still in its infancy. Who knows? Maybe we’ll see FPV racing on ESPN3 – right between ultimate Frisbee and videogame tournaments.