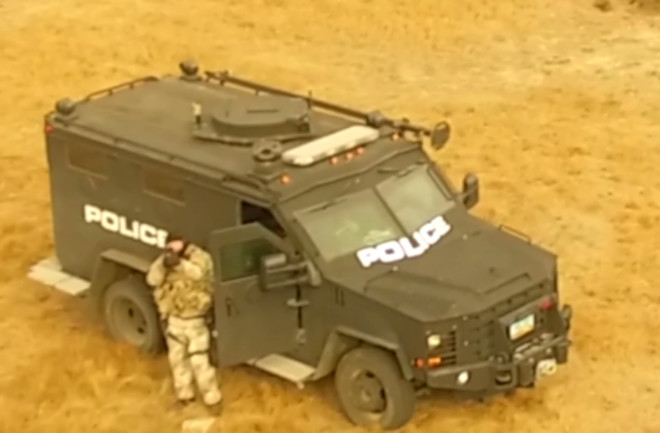 This still from Dean Dedman Jr.’s drone video, shows a police officer shooting at his drone. He was flying it during a Standing Rock Protest in North Dakota.(Credit: Dean Dedman Jr./Dr0ne2bwild)

In April, members of the Standing Rock Sioux tribe began protesting the DAPL, which will transfer oil from North Dakota to Illinois, crossing over sacred sites and under the Missouri River. Thousands of other activists, calling themselves water protectors, have joined the protest since — including drone operators.

Dean Dedman Jr., a registered drone pilot behind Dr0ne2bwild Photography and Video, says his drone and two others were in the air when shots were fired. One of the two other drones belonged to Digital Smoke Signals, described as an “Indigenous Social Media & Film” company on its website.

Myron Dewey, president and owner of Digital Smoke Signals, was flying the drone that was reportedly shot down. He lost connection with his drone and was never able to recover it, so he cannot confirm whether or not the drone was indeed shot down.

“We can only assume what happened to it,” Dewey says

During Sunday’s large gathering on Highway 1806 — which has been blocked repeatedly by protesters — law enforcement responded to calls of potential trespassing west of the highway, according to Morton County Sheriff’s Department. It was during this time that the department says drones began flying in the vicinity of law enforcement.

Not long after Dedman began flying, he heard loud gunshots. But he didn’t realize the scope of the incident until later, when he began reviewing the footage captured by his drone.

“[My drone] was shot, but it was still flying.” Dedman says. “It’s like [the drone] is protected by something.”

While it’s difficult to piece together the exact events, Dedman’s drone was recording. He estimates that up to 11 shots were fired. Note: The second video is strictly from the drone, so there is no sound.

North Dakota Highway Patrol Captain Bryan Niewind said in a press conference the issue is not that drones were flying near law enforcement, but that authorities were surveying the area with manned aircraft while the drones were in the air.

“That helicopter was buzzed repeatedly by a drone, maybe it was multiple drones, but there was a drone that was buzzing by this helicopter,” he said. Niewind claimed the drone came within 30 to 50 feet of the helicopter’s blades.

“[Law enforcement is saying that] because they’re breaking their laws and they’re using that [excuse] to justify what they’ve done by shooting the drones,” he says.

A sheriff on board the helicopter told law enforcement on the ground that the helicopter pilot and passengers were “in fear of their lives,” and that the “drone came after us,” said Sheriff Kyle L. Kirchmeier of Morton County Sheriff’s Department in a statement.

The police said the risk of a helicopter potentially crashing due to a drone pushed them to “take the drone out.” Once the drone headed away from the helicopter, authorities began firing toward the drone (which they say was flying over an open field).

What About the Federal Aviation Administration?

The Federal Aviation Administration (FAA) says it is “aware of the incident and we are investigating.”

Legally, drones are considered aircraft, which means shooting down a drone is federal crime. However, some states have drafted laws to allow police officers to shoot down drones on a state level (one successfully passed in Utah, which allows officials to shoot down or jam a drone interfering with firefighting efforts). At this point in time, we’re unaware of a law that says enforcement officials are allowed to shoot at or shoot down UAS in North Dakota.

“Regardless of the situation, shooting at any aircraft — including unmanned aircraft — poses a significant safety hazard. An unmanned aircraft hit by gunfire could crash, causing damage to persons or property on the ground, or it could collide with other objects in the air,” the FAA told Forbes in April.

But the legal questions go far beyond the scope of shooting down an aircraft.

Dedman claims the helicopter was flying at such a low altitude (roughly between 200 and 300 feet AGL) that it was breaking FAA regulations. Morton County Sheriff’s Office claims the drones flying in the air, including Dedman’s, were in violation of FAA regulations for “the use of drones around unprotected people and manned aircraft.”

According to a Facebook post, Dedman is filing a complaint against Morton County Sheriff’s Office. The Sheriff’s office said in a statement that any drones being operated illegally or in an unsafe or reckless manner will be investigated and forwarded to the Morton County State Attorney’s office.

In addition to Dedman’s incident, two other protestors were charged for crimes related to drone operation. Myron Dewey, owner of Digital Smoke Signals, was charged with stalking. Aaron Turgeon was charged with two counts of reckless endangerment, including one Class C felony for flying UAS near a patrolman’s airplane.

Dedman says he isn’t going to let these drone incidents surrounding the North Dakota pipeline protest dissuade him from flying and he hopes it won’t discourage others from using their drones for similar reasons. However, he said this before the FAA began enforcing temporary flight restrictions (TFR) around Cannon Ball, ND (where the DAPL construction site is located and the protests occur) on Oct. 25.

The FAA says, “We put the TFR in place at the request of state, local, and federal officials for law enforcement activities.” The temporary no fly zone was supposed to last through Nov. 4, but was lifted on Nov. 1.

Dedman says, “Without this drone technology, we wouldn’t be where we’re at with this battle against the Dakota Access pipeline. Drones are very beneficial — they’re our eagle eyes in the sky.”

While there are limits placed on what drone pilots can and cannot do, he says, there’s a point in time where drone pilots must push those limits — and that’s what he’s doing.

“I know what we’re doing out here — we may be bending a few rules and jumping through some hoops, but it’s for the good of this movement,” Dedman says.