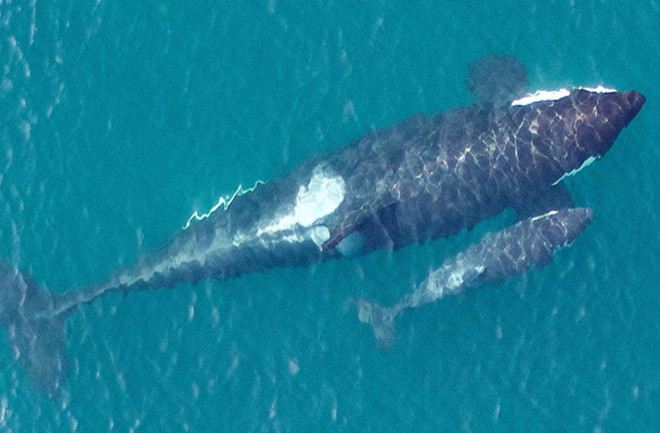 The newest member of the Southern Resident killer whale population, L122, just days after being born to first-time mother L91. Thanks to a drone, researchers received good news about a beloved, yet endangered, killer whale community in the United States. High-definition photographs of 81 endangered southern resident killer whales revealed they are fat, in good health and may be poised to welcome a few new calves to the family. The southern resident killer whale population was recently at a three-decade low, prompting concern from scientists. But these stunning photographs indicate the whales are in good shape, despite the formidable challenges they still face.

The most well studied killer whale populations are found in the eastern North Pacific Ocean, and they are divided into three distinct forms or ecotypes: resident, transient and offshore. All three types, though similar, differ in morphology, behavior, genetics and diet. Resident killer whales, for example, feed primarily on fish, whereas transient killer whales feed exclusively on other marine mammals.

To keep a close eye on this small community of killer whales, a NOAA Fisheries research team collects thousands of images to assess the size and health of the southern resident population — it’s a science called photogrammetry. In 2008 and 2013, these images were taken from a helicopter hovering at 750 to 1,000 feet. This year, a hexacopter provided up-close, high-definition photographs of the whale community during 115 total flights conducted in September.

This image shows the size of whales at different ages. Note the small, gray calf in the middle (I144), only a few months old, swimming to the right of its mother (I51). The images show whales that appear to be well fed and growing. Several females in the population also appear to be pregnant, but further analysis is needed to confirm this, according to NOAA. Photos from 2008 and 2013 painted a darker picture: several calves were lost and the whales’ overall body condition had declined. The latest photos are encouraging signs, especially since this small whale community faces ongoing challenges. Weather forecasters are calling for a strong El Niño this year, which could lead to declines in salmon runs — southern residents’ primary food source. On top of that, these whales still face threats from manmade pollution and heavy trans-Pacific shipping traffic. Let's hope next year's images show an even fatter and larger southern resident killer whale community. And on that note, enjoy one more photo of a killer whale mom nursing her calf — just to inspire a sense of optimism.