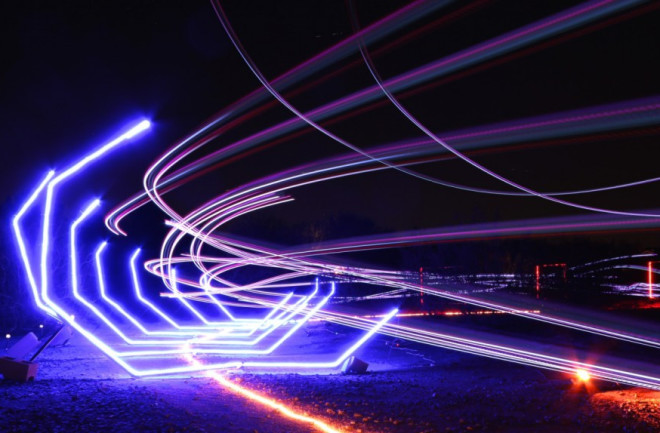 A long-exposure photo of one of David Moquay’s drone night racing tracks, displaying what racer Douglas Andriuk calls “bent lightsabers.” Picture jumping behind the wheel of an agile, quick aircraft and competing on a tricky but illuminated race track after night has fallen. It sounds like something out of a Star Wars flick, but it’s actually an Arizona artist’s twist on the underground but burgeoning world of first-person-view, or FPV, drone racing. As the dry Arizona days turned sweltering last summer, David Moquay began to experiment with constructing illuminated tracks so that his small FPV group could race during the cooler nighttime hours. A new and visually-striking challenge for drone racers, Moquay’s tracks provide a spectacular light show for spectators and deeply visceral experience for pilots. Experimenting With the Track Moquay, an artist with a background in film post-production, has been experimenting with designing courses for drone night racing for about eight months. It wasn’t pretty at first, he says, but perpetually tweaking the course to respond to the racer yielded some eye-appealing results. Initially, Moquay designs the track in the computer program Sketch, which allows him to design on a terrain map of the racing surface and take note of the contour of the track. After the design is finalized, Moquay’s group then constructs the track in his backyard, and after walking and racing the course, makes tweaks as needed. Douglas Andriuk, a retired Air Force pilot of 21 years, has raced every course Moquay has constructed. He says the night track was rather minimalistic at first, with just an inside and outside barrier outlining the course. It slowly evolved to include a variety of shapes and obstacles made of foam and PVC pipe to fly through, including an opened circle Andriuk described as a “rib.” Becoming One With the Drone “If you’re an avid video gamer, then you’ll love FPV racing,” says Moquay. “It’s like bringing Star Wars and Tron into your backyard,” he says. The niche sport of FPV racing makes use of goggles that stream live, standard definition video from a camera mounted to the front of the drone. “The mini multirotor, the drone of choice for FPV racers,” Andriuk says, “can reach speeds of up to 60 mph on the course," though he usually only pushes 40 mph. It’s an immersive experience, a new twist on virtual reality of sorts, putting the racer in the cockpit and behind the wheel of the drone. “And racing on the night course only enhances the experience,” says Andriuk. “Your eye is getting much more information during the day, but at night it looks like you’re racing through a bunch of bent lightsabers,” Andriuk explains. He says Moquay constructed an illuminated sphere, which looks like a big moon, in the middle of the course to help light up the entire area. “It’s visually appealing even when you’re not racing,” Andriuk says. “It’s fun to watch during the night racing; it’s a different perspective, wherein the day you can easily lose track of the multirotors.” Last August, Moquay was hired to construct a course for a Drone Wars competition in Tempe, Arizona and has more course design opportunities coming up; he’s currently working on an Alice in Wonderland-themed course. With the interest his night tracks have garnered, he says he’s thinking about turning the hobby into a commercial venture