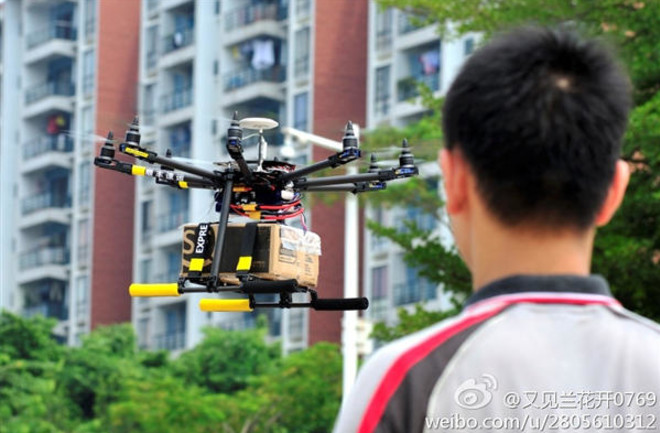 SF Express delivery drone. (Credit: Weibo) While companies like Amazon are chomping at the bit to launch drone delivery services in the United States, packages are already soaring through the air in China. Two years ago, residents in the city of Dongguang spotted experimental SF Express-branded delivery drones hovering overhead with packages in tow. SF Express is the country’s largest mail carrier, and it presently delivers roughly 500 packages a day via drone. Now, the company says it plans to expand its services and double the number a packages it sends each day, according to a Chinese news report. The state of drone couriers in China couldn’t contrast more with the situation here in the United States.

SF Express deploys octocopters that can carry about six pounds, so they're only used for small express deliveries. In China, commercial drone use is legal; businesses simply need to get authorization from aviation authorities regarding the type of drone being used. Retailer Alibaba is also experimenting with delivering teas via drone in China. And a company called InCake gave delivery drones a try, but Shanghai police put an end to that after residents feared the weight of cakes would drag down the drone. SF Express currently delivers packages by drone in cities in southern and eastern China where demand for same-day delivery is high. They hope to expand their operation to more remote villages and farms in the future. The company’s drone manufacturer, a firm called XAircraft, has said that SF Express' drone fleet will reach “several thousand units soon.”

At a Snail’s Pace

On the other side of the planet, the Federal Aviation Administration recently gave Amazon permission to conduct outdoor testing of a single prototype deliver drone. Unfortunately, that particular drone prototype became obsolete in the six months it took the FAA to approve Amazon’s request. To make up for the sluggish regulatory pace in the U.S., Amazon says it has been forced to move drone research and development to other countries. In written testimony this week to the Senate Subcommittee on Aviation Operations, Safety and Security, Amazon’s president for global policy subtlety chastised lawmakers for moving too slowly.

Nowhere outside of the United States have we been required to wait more than one or two months to begin testing… This low level of government attention and slow pace are inadequate, especially compared to the regulatory efforts in other countries…The (FAA) already has adequate statutory authority. What the FAA needs is impetus, lest the United States fall further behind.

Flying drones for commercial purposes is still banned in the U.S., but one way pilots can begin flying their craft is to go through what’s called a “Section 333” process. Basically, the FAA can give commercial pilots permission to fly a drone under highly specific parameters. Currently, commercial drone operators who obtain a Section 333 exemption can fly anywhere in the country, besides restricted areas, but must stay below 200 feet in altitude and within the line of sight of the operator. Unfortunately, only 53 commercial operators have been granted that status. There are still roughly 600 applications pending.