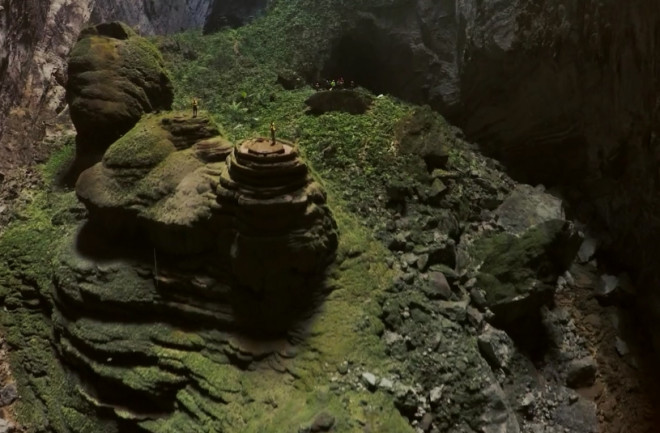 A drone helped photographer Ryan Deboodt capture this shot within Hang Son Doong cave in Vietnam (yes, those yellow specks are people). (Credit: Vimeo/Ryan Deboodt). Hang Son Doong in Vietnam is the world’s largest cave — one chamber is more than 3 miles long, 660 feet high and 490 feet wide. But just calling Hang Son Doong a cave almost does it a disservice. With its own river, microclimate and jungle, Hang Son Doong is more than a cave; it's a world unto itself. Comprehending the massiveness of Hang Son Doong is incredibly difficult, but this footage of the cave, taken, in part, with a DJI Phantom 2, is a good place to start. Photographer Ryan Deboodt and a team of explorers spent 10 hours meandering through the cave to collect footage for this six-minute video, which is worth all 379 seconds.

The video clip was filmed at three different locations within Hang Son Doong: the entrance of the cave, and two dolines — sinkholes that formed natural skylights. You can see from the video that plant life thrives in these dolines. Near the end of the clip, his Phantom hovers high above the cave to give you a great perspective of a doline’s mouth from above ground. At times, it’s easy to forget this video is set inside a cave. In his blog, Deboodt wrote:

It’s incredibly difficult to put into words how amazing Hang Son Doong really is. From the shear size of the cave to the two doline where plant life has started growing inside the cave. It is truly otherworldly and something that probably can’t be experienced anywhere else in the world.

Ryan originally planned to film the cave with three timelapse cameras, but decided to take his drone at the last minute, the Daily Mailreports. We’re glad he did.