Four hours' sleep last night, a glass of wine at the office party, an antihistamine for a stuffy nose, and here comes a car full of teens, head-on, drifting into your lane.(Be glad you're in the National Driving Simulator.)

The drunken. The drugged. The drowsy. Ginger Watson puts them behind the wheel of her Chevy Malibu every day and then sets them loose in traffic, just hoping that they'll get into a really messy crack-up. "You have to see people falling asleep behind the wheel of a car," Watson says gleefully. 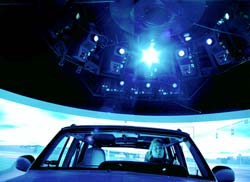 Seated at the wheel of the most advanced driving simulator in the world, this woman can't see the 15 projectors overhead that create a virtual world so real she will forget her car is on the road to nowhere.

Fortunately for those drivers, the danger is purely virtual. That Malibu isn't exactly a real car. It's a Chevy, all right, with real seats and real controls, but instead of wheels it sports hydraulic actuators that do a convincing imitation of the rumble of tires on a road. Flip up the hood, and instead of an engine there's a tangle of cables and computers. Step outside the vehicle, and the landscape fades away if viewed from the wrong angle. This demolition derby car that easily goes from 0 to 60 does it in a huge simulator. Here, Watson, director of the Human Factors Laboratory at the National Advanced Driving Simulator, can test any driver in the most awful scenario imaginable and do it over and over again.

Driving simulators have been used for years to research roadway designs, train drivers, and test consumer acceptance of new cars. The range of sophistication runs from primitive simulators with a PC screen and a joystick to those with realistic car controls and road sounds. The top simulator in the world, owned by DaimlerChrysler in Berlin, is mounted on a track about 20 feet long and adds motion to a virtual experience: Hit its brakes hard, and the cab shoots backward, throwing the driver forward into the steering wheel.

When the National Advanced Driving Simulator became operational in January, it put the German machine in the shade. For the first time, a driver in a simulator finds the world around him so believable he forgets that the car swerving into his lane isn't real. Believability wasn't cheap—most of the $80 million it cost to develop and build the simulator at the University of Iowa's Coralville research facility came from the National Highway Traffic Safety Administration.

Still, the price can seem low compared with the cost of losing about five lives every hour in highway-related accidents. Keith Brewer, director of the Office of Human Centered Research at the National Highway Traffic Safety Administration, says that traffic accidents cost us more than $150 billion a year.

The Iowa simulator is mounted on a pair of long beams that work at right angles to each other. One beam moves forward and backward, the other side to side, allowing movement within 4,356 square feet. Because the simulator's dome can move freely and quickly, it can help create a sense of pitch. If a driver hits the brakes, the Chevy will not only shoot backward and lower its nose, but the image on the giant screen around it will rise slightly. The machine can also throw a driver sideways or even transform the world into a dizzying merry-go-round during a skid.

Watson says true feeling of movement makes all the difference: "If that feeling you get back from the car is like the real world, your performance will match the real world very closely. If it doesn't, you will do some odd things." Instead of braking hard when confronted by a sudden hazard, for example, drivers in fixed-bay simulators tend to apply and release the brakes several times before going into a hard-braking maneuver. "You feel like you're not stopping," Watson says, "so you make adjustments you wouldn't make in a panic situation."

There's another problem with fixed-bay simulators: They make people sick. When the visual cues and the motion cues that a simulator feeds to a driver don't match up, the driver may develop so-called sim sickness, which often starts with sighing and a feeling of warmth, then progresses through headache and eyestrain to full-blown nausea. 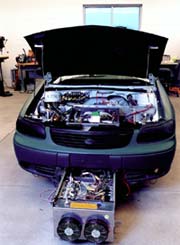 To build a driving simulator of this complexity, the engine gets tossed out and replaced by a supple, sophisticated computer. Just by changing the software, a programmer can give this car a different transmission, even a new power train.

The Iowa simulator keeps cues in sync with what engineers call nine degrees of freedom. The DaimlerChrysler simulator has only seven. Technically, any object in three-dimensional space has six degrees of freedom. The first three include moving forward and back, side to side, and up and down. Moving diagonally doesn't count as another degree of freedom because it's a combination of the first three. The second three freedoms include rotating forward and backward on an axis, called pitch; rotating like an airplane tipping its wings, called roll; and rotating sideways as if on a turntable, called yaw.

The Iowa system picks up an additional three degrees of freedom because the car can also move within a huge 66-by-66-foot square. If a simulator has two mechanisms to achieve a particular degree of freedom, engineers say the machine has an additional degree. In the case of the National Advanced Driving Simulator, for example, there's more than one way to move forward and backward. The six legs the car is mounted on can move it short distances, and the 66-by-66-foot motion base can move it longer distances.

As important as motion is to simulating the experience of driving, Watson says roughly 90 percent of driving is visual. The DaimlerChrysler machine sports a 180-degree field of view. The Iowa simulator surrounds the driver with a full 360-degree view. A ring of video projectors suspended from the roof casts high-resolution images on the inside surface of the dome, creating a sense of immersion. These visuals refresh at a rate of 60 frames per second, more than double the 24 frames per second of a conventional motion-picture projector. The inside surface of the dome, covered with a highly reflective coating, is designed to mirror almost all its light at the driver's eyes to achieve real-world brightness. "We call it the half-a-million-dollar paint job," says Yiannis Papelis, the facility's chief technical officer.

The details of the simulator's rich visual world are lodged in software pieces called tiles that represent highways, residential neighborhoods, commercial and industrial zones, rural scenes, even a winding mountain road 15 miles long. Using a program called a tile mosaic tool, designers create complex environments, such as a town with suburbs leading out into open country. The tiles can be used repeatedly with slight variations.

Technicians can also choose the time of day and weather, combining a visual scene with mechanics that change the car's performance. For example, in a rainy nighttime scene, the car may drive as though the road is slippery.

One of the most difficult elements to engineer is randomness. "The real world is never regular," Papelis says. "Not everybody will stop at a stop sign exactly the same." The problem is that when researchers run the same test repeatedly with different subjects, or even with the same person under different conditions, the two tests must be nearly identical to yield comparable results. Yet to be both believable and reliable, the simulator must supply chaos as well as order. To solve this dilemma, Papelis and his team devised software programs called run-time coordinators, which he describes as "intelligent agents that are running on the computer while the simulation is running." Coordinators are able to decide when the driving environment may be random and when it needs to be controlled. For instance, an experiment may call for a driver to react to a bus pulling abruptly into his lane. The coordinator might allow the participant to drive around in randomly generated traffic for 15 minutes. Then when the car approaches the important intersection, the coordinator takes control. Red lights turn green; unimportant actors move unobtrusively to the sidelines; the crucial bus makes its entrance. In this way, drivers can drive through the same scenario repeatedly without realizing that they are doing so because only key elements remain the same. The rest of the time, they feel as though they're driving through a very uncertain, and therefore very real, world.

Less sophisticated simulators have already yielded a lot of information about drivers. Recent studies, for example, found that drivers under the influence of first-generation antihistamines—widely available without prescription—can be more dangerous than drivers under the influence of alcohol. Drunk drivers have poor reaction times but are often capable of following along in traffic. Drivers using antihistamines show the same lack of control but also tend to nod off at the wheel. 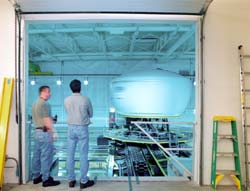 Tad Gates (left), simulator operations manager, and Jeff Dolan, senior hardware engineer, work to perfect the dome and the car inside it every day. They know some test drivers will be tempted to push the car beyond its limits, and so, Dolan says, "we do a fair amount of that ourselves to learn the limitations of the machine."

Researchers believe the Iowa simulator can further their understanding of drunk driving as well. States have been limited to setting illegal blood-alcohol levels based on statistics about drivers who have already been in accidents. Using the Iowa simulator, scientists will be able to observe drunk drivers in action, record their pulse rates, measure how far they stray from their lanes, and find out how drunk is too drunk to drive.

Other examples of how the simulator might be used are almost endless. Studies are already under way to measure how safe it is to drive and use a cell phone at the same time. And both manufacturers and academics will be allowed to use the facility. Manufacturers already have plans to plug new-car specs into the device to see just how safe a prototype is before it's built.

The answers to some questions will eventually require an even better simulator. Watson, for example, envisions an MRI-like brain scanner "mounted in the roof of a car to look at what happens when people are driving, which will enable us to know what they are really thinking and what area of the brain they are using in different conditions. That's way out there," she says, but in an age when computing ability doubles every two years or so, who can predict how soon a certain building in Coralville will be better used as a gym?

For more on the Iowa NADS facility, visit www.nads-sc.uiowa.edu.