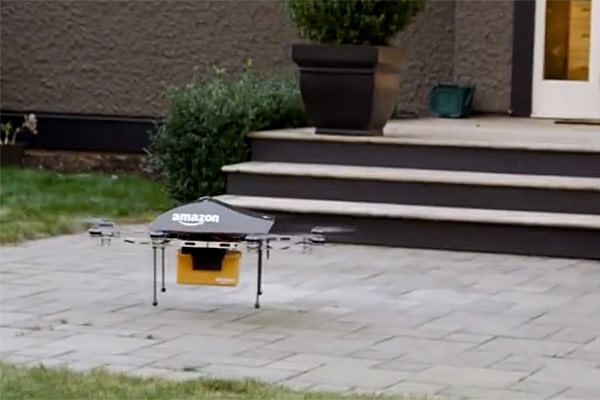 This article was originally published at The Conversation, an online publication covering the latest research.

Apparently keen to inject a bit of fun into its image after a damaging few weeks of press coverage, online retail giant Amazon has announced that it is experimenting with the use of drones to deliver its products. According to chief executive Jeff Bezos, a squadron of unmanned “octocopters” could be deployed in the next five years to deliver packages of up to 5 pounds (2.3kg) to customers just 30 minutes after they place an order. The idea of using small unmanned aerial vehicles for delivering consumer goods has been around for a few years and Amazon is unlikely to be the only company looking to the skies to expand its customer base. One company in Australia is planning to start delivering textbooks in this way as early as March. The devices have also been trialed for use in all kinds of civic projects, such as to deliver medicine, help conservation projects or spot missing people in search and rescue operations. It is even possible to train to become a small commercial UAV pilot in just one week---so in many ways, the path towards having all your purchases dropped from the heavens into your lap appears clear.

However, the wider use of drones is being held back on other fronts, not least by a lack of technology to keep operations safe. UAVs do not currently have the awareness of their environment to be able to avoid flying into people and Amazon certainly wouldn’t want to be responsible for inadvertently bashing a Jamie Oliver fan over the head with his latest hardback cookbook. What’s more, to deliver goods to people’s homes in residential areas, the UAVs would have to fly over densely populated towns and cities, something that today’s regulations prevent. If drones were to be used to deliver online orders, they would have to be kitted out to deal with the situations themselves since you could not rely entirely on the communications between pilot and drone to work all the time. There are also regulations in place which prevent them being operated beyond the line of sight without special permissions being granted. At the moment, drone batteries limit them to around half an hour of flight time, so long-distance delivery would be out of the question. The existing regulations are there for a good reason – to protect other users of the airspace from collisions and to minimize the risk of injury to people on the ground. It is not clear at the moment how Amazon or any other operator of these small UAVs will be able to make the safety arguments that they are airworthy enough to be operated beyond line of sight over towns and cities. Even if safety and regulations are taken out of the equation, the very nature of a UAV could frustrate Amazon’s hopes. With no one to guard them, the aircraft and its cargo could be captured and stolen.

Despite these problems, it seems likely that regulations will be updated as new enabling technology emerges that can make UAVs safer to operate. At the moment regulators are particularly concerned about collisions but they might be more open to the use of UAVs if they can be equipped with sensors and reliable software to predict collision risks and take avoiding action. This area of technology is still largely in prototype stages and is primarily being developed for larger UAVs that have the space to carry it. Packing collision avoidance equipment onto small UAVs remains difficult. In the meantime, in areas of very sparse population, it may be possible to segregate the UAVs so that they have a sterile corridor of airspace in which to fly. But even that approach comes with challenges, as the UAV designer and operator will need to convince regulators that it will remain within that corridor and not veer off. Usually that means tight operating procedures have to be put in place, or again another technical solution is needed. None of these technical challenges are unsolvable, but it will require considerable investment in technology before we see a sky full of commercial UAVs. But if Amazon has the bumper Christmas it expects, it might just have the cash needed to make drones a reality for bookbuyers. The University of Central Lancashire receives funding from the UK Government Regional Growth Fund to support a UAV software supply chain initiative known as the GAMMA Programme.