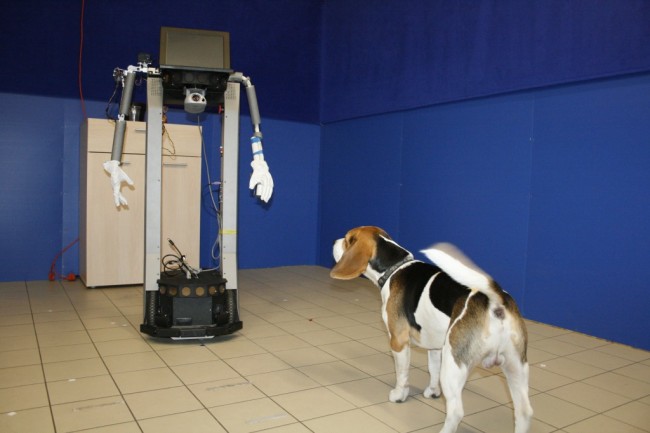 When it comes to designing more social robots, dogs may be an engineer's best friend. A recent experiment showed that dogs reacted to robots with voices and faces as if they were humans, indicating that future social robots could be tested on dogs to evaluate the bots' humanness. Dogs are good at observing their owners' behavior and then acting in kind, such as when a dog barks at someone who appears to be threatening his owner. So step one of this robot analysis study was to have dogs watch their owners interacting with the robot. The robot's only human aspects were a pair of white gloves at the end of arm-like appendages. Aside from that, it resembled an oversize pair of plastic tweezers on wheels, with a laptop in place of a head. 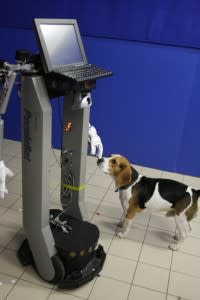 Putting Robots to the Test

Half of the 41 dogs initially witnessed social behavior: their owners conversed with the robot's pre-recorded voice and shook its hand. The other half saw their owners type on the robot's keyboard and get only beeps in response. Then came the dogs' turn. In each case, the robot indicated the hidden location of a treat by pointing and either saying the dog's name (for the social robot) or simply beeping (asocial). The dogs were much more inclined to hang around and look at the social robot, and were also more successful at finding the treats it pointed to. The researchers think the dogs were taking cues about sociability from their owners about how to interact with the robot.

The researchers say their findings

, published in Animal Cognition, demonstrate the value of dogs as unbiased robot critics---since most of them have not seen one too many robot movies or developed strong opinions about their cultural significance. Dogs' reactions could communicate to engineers the threshold between interactive and truly social, which is often a sticking point for making robots that are sufficiently human-like. If researchers succeed in this pursuit, Fido may one day be playing fetch with robots instead of us. Image credits: Eniko Kubinyi