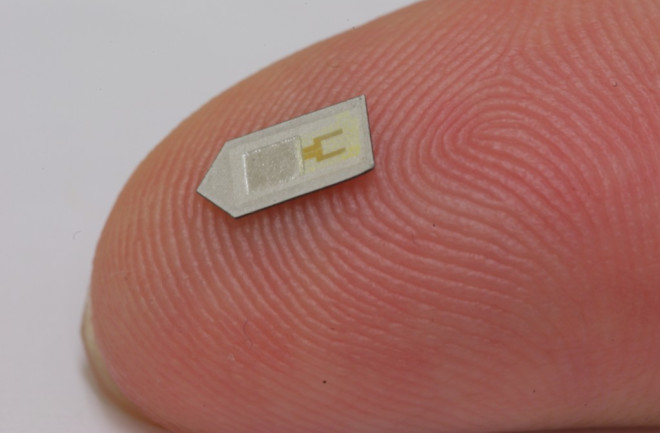 A bioreabsorbable sensor. (Credit J. Rogers, University of Illinois) It was a pretty big “what if.” What if you could design an implantable medical device that was durable, reliable and accurate, but also dissolved into completely harmless materials when its work was done? The two concepts are a bit incompatible, but John Rogers and his team were up to the challenge of bringing them together. Rogers, a professor of materials science, engineering and bioengineering at the University of Illinois at Urbana-Champaign, designed novel electronic sensors that collect crucial health data following a brain injury or surgery, and completely dissolve into cerebrospinal fluid when they're no longer needed. Rogers said making a "what if" a "what is" required “completely different classes of materials, those that are not only biocompatible, but biodegradable and end products that are biocompatible.” “I’m interested in ways to engineer electronics to solve problems of human health,” says Rogers. “You can think about that like advanced wearables, but also devices that implant inside the body.”

So far, medical implants have either been permanent— like pacemakers — or required surgery to remove when the device's duties ended. “That exposes the patient to a lot of risks,” says Rogers. “Our thought was if you could create electronics out of materials that are biodegradable, with high performance, robust operation for a relevant time frame, but that would just naturally dissolve and enzymatically disappear, you’d never have to take the devices back out.” Rogers and his colleagues spent several years developing the sensors, and this week the team's results were published online in the journal Nature. They tested the performance of silicon-based brain temperature and pressure sensors that completely dissolved within a few weeks. Soluble wires connected the sensors to an external data-transmission device.

An illustration of the sensor. (Credit: Julie McMahon) The proof-of-concept study — done with rats — found the devices performed comparably to non-dissolvable ones currently in use. Rogers' team reported stable, continuous operation of the sensors for three days, which is a clinically relevant time frame to monitor traumatic brain injuries. It was a significant milestone after what was a long process of trial and error for Rogers and his team. “What you’re attempting to do is create a piece of tech that functions in a robust and high-performance manner, that doesn’t give up any precision or accuracy to the kind of tools in use today, but is constructed entirely of materials that dissolve away in water and biofluids,” says Rogers. “It’s an intrinsically conflicting set of requirements. It needs to dissolve, but can’t dissolve at all during that period” where it is in use.

It’s a “real materials challenge,” he said, and that’s where they started. Their first publication on water-soluble components was back in 2012, and they have been “working continuously to build up a library of material choices” to use when they were building the brain-monitoring device. They eventually found multiple options for each part of the devices, from the substrate to the semiconductor, to the metal and the casing.

The sensors completely dissolve when they are no longer needed. (Credit: J. Rogers, University of Illinois) “There was science built in with which material was likely to work best,” says Rogers. “There were many, many combinations and we used scientific insight to hone in.” With this successful test passed, they’re looking ahead to next steps that they hope will lead to the technology being used in humans to sense internal conditions, like this study showed, or to deliver medicines directly where they are needed. “The ultimate goal is to get a piece of tech that has a real impact on human health,” says Rogers. “We’re on the front end of that process.”