Digital Cache: The Evolution of Computers

A computer museum in Silicon Valley offers some perspective on the next new thing. 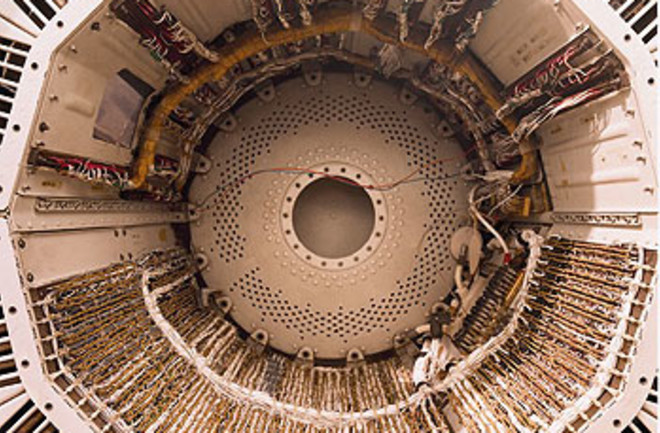 The mass of wiring and circuitry built into the wall of the Minuteman I rocket, just below the warhead, is the first digital flight computer for nuclear missiles. Earlier guidance systems relied on radio links to ground computers and were vulnerable because atmospheric explosions during a nuclear war would have disrupted radio transmissions.

Once they were huge, the electronic equivalents of Zeus on Mount Olympus, cumbersome, cranky, and commanding constant care. More recently, they have become abstract and ethereal, shrinking into mote-size microprocessors and vanishing into wireless networks yet retaining the power to awe, chasten, and grant blessings. In their seventh decade, electronic computers have morphed again. They are not just tools but objects worthy of contemplation in their own right. And now they have their own museum, a secular temple, if you will, devoted to explaining how and why they came to be.

A day spent at the new Computer History Museum in Mountain View, California, rekindles the wonder the big old machines must have inspired in their postwar creators. “People reach a point—it can be at age 16 or 60—when they realize there is more to life than the next new thing,” says John Toole, executive director of the museum. “It’s important to celebrate the past. Who were the pioneers? What did they create? That’s what we’re trying to show.”

The museum is in the right place—minutes from Apple, Hewlett-Packard, Sun Microsystems, and Stanford University. The dot-com bust cheapened Silicon Valley commercial real estate, allowing the museum’s directors to buy this new building in October 2002. A 119,000-square-foot minimalist marvel once owned by Silicon Graphics, its geometric glass planes and soaring walls are a suitably reverent backdrop for the collection, which ranges from wooden abaci to liquid-nitrogen-cooled supercomputers.

The museum can reformat old prejudices and even prompt revelations. While computers did and still do foster pain and heartbreak (in the personal computer section, my blood pressure spiked as I glared at the double-floppy-disk-drive IBM PC that ate my files at random intervals in the late 1980s), the ingenuity behind them is inspiring. Toole enjoys leading computer-science graduate students through the displays and asking them when such breakthroughs as delay execution or compiler technology were invented. “Invariably they say, ‘In the last five years.’ They are really shocked when they see that some of these things have been around over 40 years.”

The Eisenhower-era geeks impress the youngsters in other ways as well. Back when every byte was precious, efficient programming mattered. “All you had was just a little bit of memory, so you had to be very clever,” Toole says. “There was some brilliant coding in these machines.” Conversely, he says, today’s programmers, awash in easy gigabytes, “can get a little sloppy,” making applications slower, buggier, and more vulnerable to hacking than they should be. To preserve venerable elegant software, the museum stores source code from punch cards, paper tape, and magnetic-tape reels and makes it available to researchers. “In this phase, the gallery experience is mostly hardware, but in future phases, we will have a software-themed gallery,” says museum spokeswoman Catriona Harris. Perhaps they’ll consider an entire exhibit devoted to the DOS-era imprecation “Bad command or file name.”

When the Byte Shop, a pioneering computer store in Mountain View, California, ordered 50 innovative small computers from Steve Jobs and Steve Wozniak for $500 each, the garage-based company that grew into Apple Computer Inc. was born. For $666.66, the retail purchaser received a circuit board and 16-page assembly manual; each owner had to supply a keyboard and monitor and build a case, usually of plywood. Only about 200 Apple I’s were made; about 50 are thought to still exist, including one at the museum with a case signed by Wozniak. “They  now sell for up to $40,000,” says John Toole, executive director of the museum.
Hand tallying the 1880 census took seven grueling years. Engineer Herman Hollerith won a government competition for a mechanical device to tabulate the 1890 census. Pins dropped through holes in punched cards and touched individual cups of mercury, completing electrical circuits that spun the counting dials. It was a roaring success. One hundred of the sturdy oak-cased machines counted 62 million cards at a rate of 1,000 cards an hour per machine, allowing the data to be tallied in six months at a cost that was $5 million below forecasts. Hollerith’s company merged with two others and became IBM in 1924. Punched cards, recalcitrant chads notwithstanding, would be used for data entry for more than a century.
This assortment of personal computers evokes memories of DOS meltdowns, all-night WordStar keystroke-memorizing sessions, and Lotus 123 freeze-ups caused by maddening machines and their monochromatic monitors. Featured models include the Osborne “portable” from 1981, which weighed in at 24 pounds. Also on view are the Commodore 64 from 1982 and the TRS-80 from 1983. One of the most interesting antique PCs is the Kenbak-1, first advertised in 1971. With a 256-byte memory and a $750 price tag, some regard it as the first personal computer. Only about 40 were sold before the company shut down in 1973.
In 1960 designers were given just one cubic foot in which to build a guidance computer for the Apollo space capsules. In 1962 they decided to meet the challenge by using integrated circuits, which had been invented just three years earlier and cost $1,000 each. By 1965 the price had dropped to $25. The computer was first used to steer Apollo 7 into Earth orbit. On July 20, 1969, it guided astronauts Neil Armstrong and Buzz Aldrin to the moon’s surface. Input was achieved via two-digit codes the astronauts punched into the control panel.
Early card-sorting systems, widely used for payroll calculations, required human operators to put punched cards in the proper slots. The Model 080 sorted them automatically by reading holes punched in a routing column, then shuttling the cards to the proper pockets. Multiple passes permitted more complex sorts. This was the most popular example of IBM’s punched-card equipment before the advent of true computing. Some 10,000 units were on lease in 1943.
As Americans huddled around the Philco Corporation’s popular television sets in the late 1950s, it was only natural that the transistor-manufacturing giant would take a flier at the computing business. The Philco 212 performed scientific and data-processing functions. Complete with a then capacious 64-kilobyte core memory, it cost a mere $1.8 million, or about $10.7 million in today’s dollars. Ford Aerospace later bought Philco, and the company eventually quit the computer business.
A 55,000-tube monster coordinated the nation’s missile defense in the 1960s, linking hundreds of radar stations into the first large-scale computer network. “There were people on roller skates carrying replacement tubes to keep it running,” says Toole. The museum doesn’t own the entire computer, but it does have this console. “The built-in cigarette lighter was standard equipment,” he says.
1 free article left
Want More? Get unlimited access for as low as $1.99/month
Subscribe