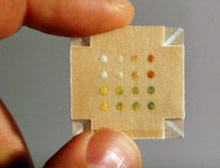 A new device smaller and cheaper than a postage stamp could be used to diagnose diseases in developing countries, Harvard researchers report. The sophisticated microfluidic diagnostic devices, called microPADS, are made out of little more than paper and sticky tape and cost about three cents each.

"The starting point with us was asking, 'What's the simplest, cheapest [material] we could think of?' ... And that was paper," [The Scientist]

said co-author George Whitesides. The microPADs, described in the Proceedings of the National Academy of Sciences [subscription required], are made with layers of paper and water-proof tape. Tiny holes and channels etched into the paper lead from a small number of

single wells on top and branch out through the stack to an array of microwells on the bottom [IEEE Spectrum].

When liquids such as urine or blood is placed in the upper wells, they are absorbed through the channels into the microwells, which contain proteins, antibodies, or other chemicals. A color-change reaction indicates the absence or presence of a disease. Because the device splits one sample into dozens of separate microwells, several tests can be performed simultaneously.

The prototype microPADs transported four separate liquid samples to 64 designated reservoirs within 5 minutes. In 27 out of 30 tries, the devices moved the liquids without mixing them [ScienceNOW Daily News].

In the developing world, cost, durability and ease-of-use are stumbling blocks for many medical technologies. But a cheap, simple device like a paper microfluidics chip could be used in health care diagnostics, and for monitoring environmental factors, quality of water and the health of plants and animals [Wired Science].

Thanks to paper's natural wicking abilities, the new device doesn't require a pump to transport the fluid. Traditional microfluidic diagnositic devices made out of plastic or glass require a pump and can cost several hundred dollars apiece.

So far, the researchers have used the microPADs to test for glucose and protein in urine. Next they will adapt the technology to be used with blood, which could enable tests for HIV, dengue fever or hepatitis. Whitesides envisions the devices to be eventually produced on an industrial scale, using machinery similar to newspaper presses. For the devices to be used in remote locations without medical facilities,

the researchers have also begun work on coupling the paper tests with cell phones, so that the results can be photographed, sent to a center, and read by a technician who can send recommendations back via phone [Technology Review].