The Trinity Site in New Mexico is safer than you'd think, and you have to look hard to see the signs of its momentous place in history. 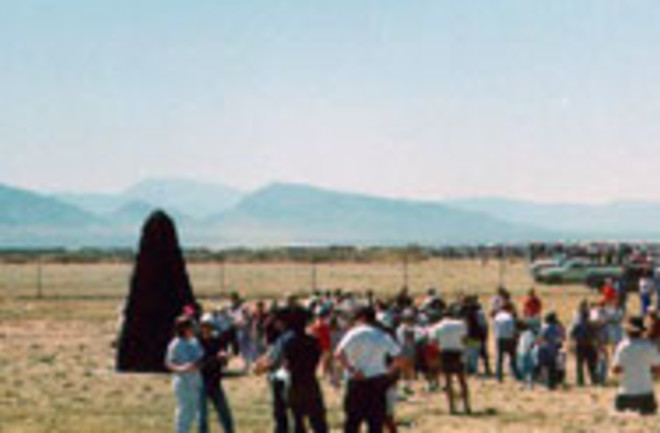 Where the Big Bang theory took on a whole new meaning.

Driving east on New Mexico’s Highway 380, visitors are often startled by what they do not see as they approach the Trinity Site. Sixty-five years after the explosion that paved the way for nuclear war, there are no burn marks, no signs of blast, no significant radiation. But the location is anything but ordinary. At this precise point, on July 16, 1945, humans first glimpsed their capacity for catastrophic destruction and witnessed the world-altering power of the atom.

Twice a year—on the first Saturdays in April and October—the U.S. Army’s White Sands Missile Range sponsors tours so that the public can visit the site without fear of being hit by the missiles that are regularly tested there. During the nearly 200-mile drive south from Albuquerque, you understand why the leaders of the Manhattan Project chose Trinity. The desert plain here is strikingly flat, the better to observe the blast; it is surrounded by mountains that help restrict access and prying eyes; and it is empty—beautiful, but stark.

Along the way you pass near the Valley of Fires, a 5,000-year-old lava field whose dark flows contrast dramatically with the gleaming gypsum dunes that give White Sands its name. A detour to the west would take you to the Very Large Array, one of the world’s greatest radio observatories and a monument to a starkly different application of World War II–derived technology.

At the entrance to the Trinity Site, you are greeted by vendors selling T-shirts, commemorative patches, hot dogs, hamburgers, and drinks. Until a few years ago, you were not allowed to bring any food or drink to ground zero or even apply makeup for fear radioactive dust would stick to lipstick that could be ingested by women chewing their lips (seriously). Even today, Trinity visitors look for the effects of radiation everywhere, including the scrub inside the interior perimeter close to the point of detonation, which is shorter than the vegetation on the rest of the plain. “People are sure it’s a form of mutant grass,” says Trinity public affairs specialist Lisa Blevins. “But we just mow it shorter there to keep snakes from hanging out where people walk.”

The Army’s brochure for visitors assures us that radiation levels in the area are “very low,” ranging from 0.05 millirem near the parking lot to as much as 10 times that amount in the ground zero area. Even the high end is less than what you would absorb during a cross-country plane flight. “Yeah, right. This from the guys who told us to duck and cover in the case of a nuclear attack,” one fellow tourist wryly comments as he sees me scribbling in my notebook. Then again, the Boy Scouts and amateur scientists who regularly visit here with radiation detectors don’t look particularly alarmed.

In fact, a popular activity at the Trinity open house is searching for Trinitite, emerald-colored glassy rocks formed from sand caught up in the firestorm of the nuclear blast—in essence, shards of fallout. Immediately after the test, the site was covered with the stuff, but bulldozers—aided by time and constant pilfering—have made it scarce. Naive tourists often mistakenly pick up fresh rabbit droppings, which are also green.

I eventually find several chunks of the real stuff that beg to be taken home and made into earrings. Unfortunately, because the site is a national historic landmark, it is a federal crime to remove Trinitite. Blevins sees me eye the pebbles covetously and warns, “We’re not making any more of it.” Trinitite is also slightly radioactive, so wearing it close to my brain would probably be unwise.

Initially the guided tour has a festive tone, but the closer people get to the historical marker at the point of detonation, the more subdued the chatter becomes. At first I am underwhelmed. Even right at ground zero there is no crater, only a slight bowl-like depression, because the bomb exploded 100 feet off the ground, suspended in a tower that was instantly vaporized. I walk up to the plain stone obelisk that marks that spot. It bears a brass plaque that simply reads, “Trinity Site—Where the world’s first nuclear device was exploded on July 16, 1945.” I mutter to myself, “That’s it?” But really, how do you mark the point where man learned to play God?

The next Trinity Site open house will be on April 3, 2010. There is no charge for the visit, which includes a tour of the McDonald Ranch House two miles away, where the core of the bomb was assembled. For more information, visit www.wsmr.army.mil.

San Antonio, NM: This tiny town, minutes from the Trinity Site, has been named home to two of the top 10 burgers in the nation, according to GQ and epicurious.com: at Buckhorn Tavern (575-835-4423) and the Owl Bar & Cafe, just across the street (505-835-9946). For rest, the Fite Ranch provides guest rooms on a working cattle ranch.

Los Alamos, NM: Both the Bradbury Science Museum and the Los Alamos Historical Museum have valuable exhibits on the history of the Manhattan Project.

Albuquerque, NM: The National Museum of Nuclear Science and History features a comprehensive collection related to the atomic age.

Nevada Test Site, NV: This site of 928 nuclear explosions, most of them underground, is open for guided tours, which leave from the Atomic Testing Museum in Las Vegas.