Deform to Perform: A Different Take On Programmable Matter 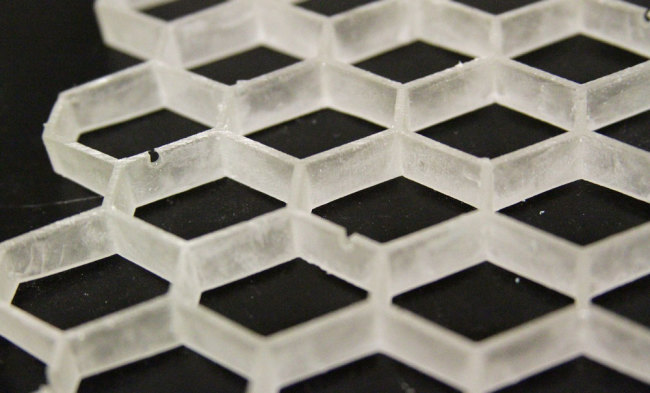 Crowning the plethora of issues with the last Transformers movie, Michael Bay notwithstanding, was the programmable matter — matter that can change its physical properties autonomously, or based on instructions from a designer. Bay’s take on it, transformium, is a new pop-culture reference point for programmable material (when, on the spectrum of fantastic self-assembling robot bodies, Terminator was objectively more realistic). Bay also overlooked the wide array of applications the tech could have, in addition to shape-changing. But most of all, it just seems a bit unrealistic for matter to just take on new physical properties just by changing shape...until now.

As it would turn out, researchers at Purdue, have been working on a way to make matter do just that — though not for the purpose of making giant robots. Rather, the researchers have created new types of lattices that can be tuned to adopt new physical properties, through those most reliable of programming methods: heat and crushing force. Their research, funded by General Motors, was described in two papers published in the International Journal of Solids and Structures.

Bend It, Heat It, Stretch It, Push It, Cool It, Alter — Then Reset It

The structures are made of shape-memory polymers, a material that can be deformed repeatedly with little wear. “You heat it to change the shape. You cool it down, and it will remain in that shape,” according to one of the researchers, Pablo Zavattieri. The advancement in their materials lies not only within the substance itself, but in its shape: hexagonal honeycomb and kagome-pattern lattices. When a compressive force is applied to this cellular structure, it collapses in a specific, predictable fashion. As the material deforms, its resistance to further compression changes, enabling the material’s stiffness to adapt in measured response to deformation. “When we combine” shape memory polymers, as Zavattieri notes, with this kind of cellular structure, “it actually amplifies the capabilities being programmed.”Each lattice pattern deforms differently in response to compression: the hexagonal cells boast a more versatile, and overall compliant “bending-dominated topology.” Meanwhile, the kagome cells, with a “stretching-dominate topology,” were more resistant to compression, meaning that their shape is reinforced against bending. The researchers intend to combine different patterns and shrink the lattices down to a point where individual cells are the width of a human hair. “Now… what we can do in the future, is to actually have gradients of these structures. We can actually think about structures that change geometry from left to right, that goes from a hexagonal shape to a kagome shape.” Moreover, Zavattieri notes “You could actually change the… base materials.” To that end, the scientists intend to construct similar cellular structures with less elastic materials, namely, aluminum and bistable materials that maintain a rigid structure, but can collapse between two different, stable configurations (think snap bracelets and tape measurers).

What's It Good For?

The end goal of all this tinkering is an array of materials that can be mass-produced, and then programmed post-manufacturing, to adopt the physical properties needed to serve a specific application. And according to Stanford University visiting professor Elliot Hawkes “[there] are countless applications where a post-manufacture tunable stiffness could be helpful.” A programmable material like this could provide tunable reinforcement for an automobile’s crumple zone, or better football helmets. Moreover, the properties that could be programed into such lattice structures go quite beyond stiffness. “I imagine one could tune other properties, such as electrical or thermal resistance, by clever reconfigurations of pathways through the material” notes Hawkes. And according to Zavattieri, the researchers involved see opportunities for their quizzical little lattice to be scaled down into tunable, sound-absorbing materials and radar shielding or move loads by harnessing the material’s thermal expansion capabilities.So, on the off chance that Michael Bay reads Discover, it’d be neat to see a bot that can tune its deformable skin to be invisible to radar.