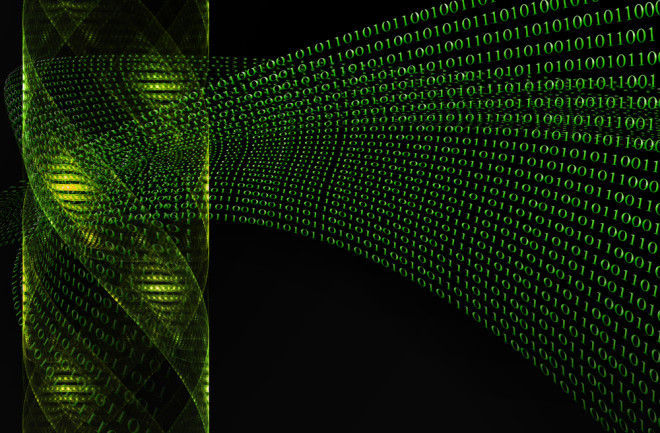 Genetic and binary code. Image courtesy of artida / shutterstock DNA is the building block of life, but in the future it may also be the standard repository for encyclopedias, music and other digital data. Scientists announced yesterday that they successfully converted 739 kilobytes of hard drive data in genetic code and then retrieved the content with 100 percent accuracy. The researchers began with the computer files from some notable cultural highlights: an audio recording of MLK Jr.'s 1963 "I Have a Dream" speech, all 154 of Shakespeare's sonnets, and, appropriately, a copy of Watson and Crick's original research paper describing DNA's double helix structure. On a hard drive, these files are stored as a series of zeros and ones. The researchers worked out a system to translate the binary code into one with four characters instead: A, C, G and T. They used this genetic code to synthesize actual strands of DNA with the content embedded in its very structure. The ouput was actually pretty unimpressive: just a smidgeon of stuff barely visible at the bottom of a test tube. The wow factor arose when they reversed the process. The researchers sequenced the genome of the data-laden DNA and translated it back into zeros and ones. The result was a re-creation of the original content without a single error, according to the results published in Nature on Wednesday. So what does DNA offer that other data storage methods don't? One, it can pack data really densely. A single gram of DNA holds more than a million CDs, according to the researchers. Two, DNA lasts a really long time in a range of conditions. It is not nearly as sensitive or fragile as existing data centers. Three, DNA has a reputation for safely storing information: It holds the history of all life on Earth, a tough resumé to top. This is not the first time DNA has been used to store data, but the latest iteration is far more efficient, accurate and scale-able than its predecessors. The method would be especially useful for archives that need to be stored long-term without frequent access, acting as an emergency backup rather than a practical replacement for your flash drive. The thing holding the technology back at this point is the cost. Sequencing and especially synthesizing the DNA is a pricey process, but like most new technologies, it is getting cheaper fast. The researchers say DNA data storage could be a large-scale solution as soon as 2023.