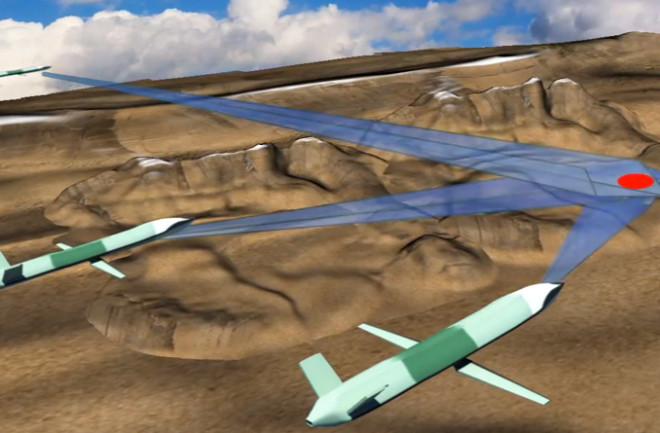 A first wave of reconnaissance would identify enemies and jam radar signals. (Credit: DARPA) To rule the skies above future combat zones, the United States military is developing swarms of interconnected drones and missiles. The military’s research arm, the Defense Advanced Research Agency (DARPA), is developing what it’s calling a “system-of-systems,” or, more simply, technology that allows drones to deploy hordes of other drones that perform a series of functions to, in DARPA’s words, “impose asymmetric costs on adversaries.” In other words, destroy the target in unison.

A video released by DARPA illustrates a hypothetical scenario showing how a “system-of-systems” approach works. When a human pilot flying an F-35 encounters enemy anti-aircraft missile launchers, he sends a signal to spur a drone mother ship into action. At a safe distance, the drone mother ship, basically a modified C-130 transport aircraft, launches three surveillance drones that make a beeline to the enemy.

Three drones work together to beam back information about an enemy's location, and blocks their radar signals. (Credit: DARPA) The first wave of drones gathers images and other data about the enemy, and they also work in unison to jam the enemy’s radar. The data collected is beamed back to the pilot, who, after confirming it’s an enemy, commands the mother ship to launch a pack of cruise missiles that speed toward the target. Essentially, the “system-of-systems” approach distributes reconnaissance and combat amongst a large number of unmanned vehicles to keep a pilot safe while also overwhelming the enemy with sheer numbers. DARPA envisions a mostly autonomous system that digests gathered data to give the pilot just enough to make a decision. The pilot basically plays the role of the middleman, initiating attack sequences or choosing another tactic based on the data received. DARPA announced the project late last month.

After receiving a signal from a human pilot, the drone "mothership" unloads a swarm of guided missiles. (Credit: DARPA)

The purpose of the “system-of-systems” approach is to build a combat system that is effective and cheap. Rather than develop more complex, highly expensive drones that can accomplish more functions, DARPA’s system relies on relatively simple, inexpensive drones that, when combined in swarms, get the job done effectively. DARPA’s project is still in the conceptual phase, but the agency would like to begin experimenting with this technology by 2017 and move to full-scale testing by 2019. The keys moving forward are to make the technology simple for pilots, and also ensure enemies can’t hack into its software. DARPA has already awarded contracts to Boeing, Lockheed Martin and others to develop “system-of-systems” capabilities. Although the agency hasn’t indicated this, one has to wonder whether DARPA’s quadruped robots might also fit into the “system-of-systems” approach. The thought of robotic shock troops converging from the ground and the sky is a strong impetus to give peace a chance.