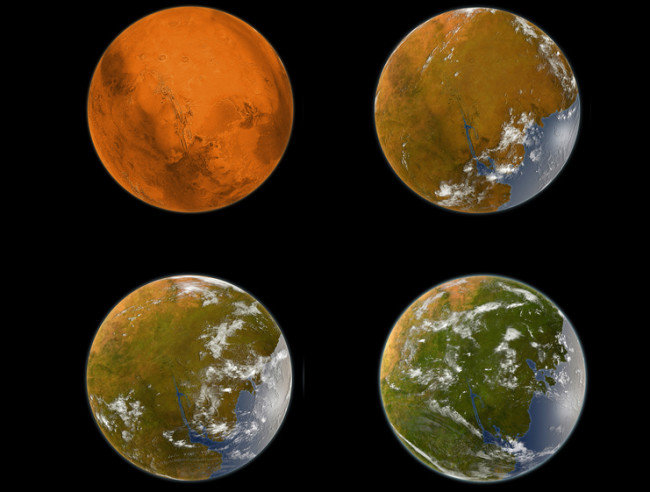 The U.S. Defense Advanced Research Projects Agency wants to create organisms that will turn the Red Planet a shade of green, at least according to a reporter who had access to their recent conference. As with most things DARPA does, there's not a lot of publicly available details about the plan. DARPA denies that terraforming Mars in anywhere in their sights. But comments made by Alicia Jackson, deputy director of DARPA’s Biological Technologies Office, seem to indicate that it is at least a hypothetical possibility.

In the distant future, if humans want to take a stroll outside on Mars, the planet will need some serious “redecorating” through a process called terraforming. Basically, we need to add plants, algae and other organisms that undergo photosynthesis in order to generate gases that build the foundation of an atmosphere. With an atmosphere in place, Mars will begin to look and feel a lot like Earth. Terraforming Mars sounds like a job for generations far into the future — or a plot line written for Hollywood’s Matt Damon — but DARPA may be helping bring it nearer. “For the first time, we have the technological toolkit to transform not just hostile places here on Earth, but to go into space not just to visit, but to stay,” Jackson said at a DARPA-hosted biotech conference this week, according to Vice’s Motherboard.

The project's centerpiece presently is software, called DTA GView, which maps genomes is fine-scale detail and gives scientists a new way to mine this genetic library for ideal traits. The long-term plan is to pick and choose preferred genes from a number of species, combine them, and create a new organism. It’ll all start with simple bacteria and microorganisms, but more complex organisms are on the radar. Mars likely won’t be the first place these customized creatures will operate. DARPA could use specifically engineered organisms to rehabilitate tracts of land on Earth devastated by natural or man-made disasters. Organisms could take a wasteland and make it green once again, Motherboard reports. There’s still a long way to go before rainforests are growing on Mars, but it’s certainly exciting that terraforming Mars is no longer a completely fantastical idea.