Cyborg Moths, Wired From Birth, Could Serve as Living Drones 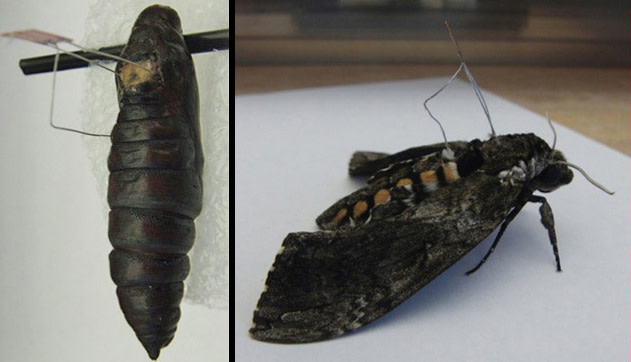 In a lab at North Carolina State University, researchers have created moths that are a blend of wires and tissue. The eventual plan: to control a cyborg moth army. The biobots could be used to map ecosystems, spot survivors in search and rescue missions, or to carry out spy missions.

Hacking an animal is possible because animals are, in part, electric: movement (in moths or in you) happens when the brain sends an electric signal to a muscle. A controllable cyborg bug could, theoretically, operate like a tiny robot — one that's been honed by millions of years of evolution. Previous work on cyborg moths has shown that the concept can work. In 2012, a team at MIT successfully steered a moth by controlling the twisting of its abdomen with electric pulses. What has been challenging is monitoring how the moth itself accomplishes moving while minimally restricting its flight — a feat that could help researchers design better electrical complements. 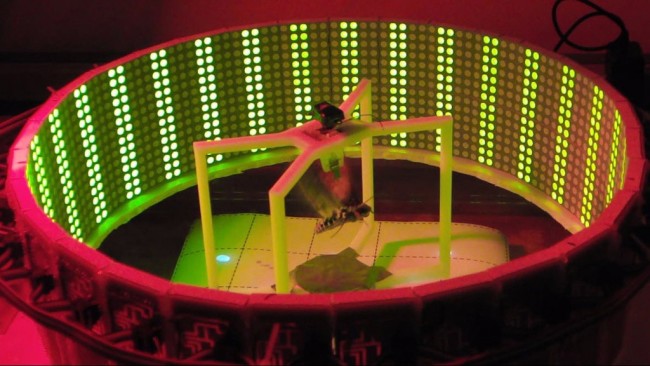 This latest cyborg-moth iteration gives researchers a peek into how a moth goes about flapping its wings — and therefore, how that flapping could be controlled. Alper Bozkurt and his team integrated an electrode into the insect by inserting it while the pupa was in its cocoon. As the bug’s tissue developed, it fused to the implants; wires were incorporated with tissue. Then, when the moth emerged, the researchers observed its flight by magnetically levitating the moth. A tiny arena with LEDs simulated movement, and scientists wirelessly collected data as the moth navigated. In this controlled environment, the researchers could observe the electric pulses that the moth’s brain sends to its wing muscles. The researchers published their method in the Journal of Visualized Experiments.

A Legion of Bugs

In future work researchers could use the implant to send signals to the moth to control wing-flapping. The biobugs could also carry tiny payloads to achieve their missions: a microphone to pick up sound, or sensors to detect dangerous gases. We aren’t yet in an era of free-flying, spying, cyborg moths — it will take more research on how these critters move. And though they’ll be the product of meticulous research and engineering, they'll also be ideal for navigating dangerous situations: after all, they’re just bugs. Photos by Alper Bozkurt