Cutting-Edge Technology You Can Spot at the Sochi Olympics

The Sochi Olympics are churning out dramatic victories – but athletes aren’t the only ones who fine-tuned their craft to get here. As U.S. bobsledders, skaters and lugers compete during these Games, they’re doing so with cutting-edge technology that’s gone through an equally exhaustive testing process. These technological upgrades, which look to bolster their respective sports with faster times and improved features, will help athletes stand their best chance yet at scoring the gold this year. Here we take a look at three notable improvements. 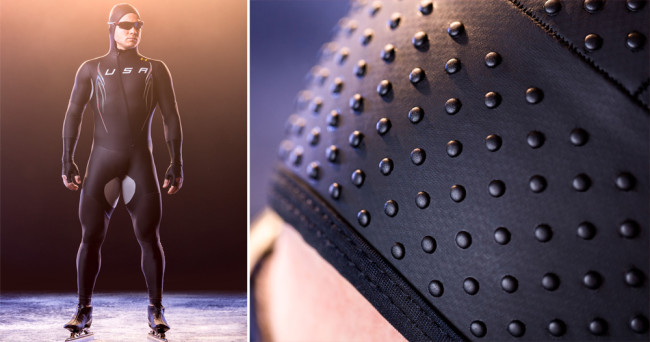 With speed skating, the difference between scoring a gold medal and walking home empty-handed is determined by a fraction of a second. To help put U.S. Olympic speed skaters on the winning side of that difference, sporting goods manufacturer Under Armour and defense contractor Lockheed Martin created the Mach 39 speed skating suit to shave off those precious nanoseconds. Whereas most suits try to be as slick and aerodynamic as possible, Under Armour went the opposite direction by installing “flow-molding” on the backside of the Mach 39 suits. These strategically placed dimples work like the bumps on a golf ball, cutting back drag that accumulates behind high-velocity objects. “We’re trying to disrupt that air flow before it bulks up behind a skater,” Chief of Innovation Kevin Haley said. Along with reduced air drag, the suits also cut down on friction generated between the athlete’s thighs as they cross over one another for tight track turns. Dubbed “Armour Glide,” these textiles are strategically located on the athlete’s inner thighs, where t he most friction—and energy waste—occurs. With the textiles, athletes see a 65% drop in the coefficient of friction between the legs, letting them redirect their strength onto the ice and “put more power into the skates,” Haley said. 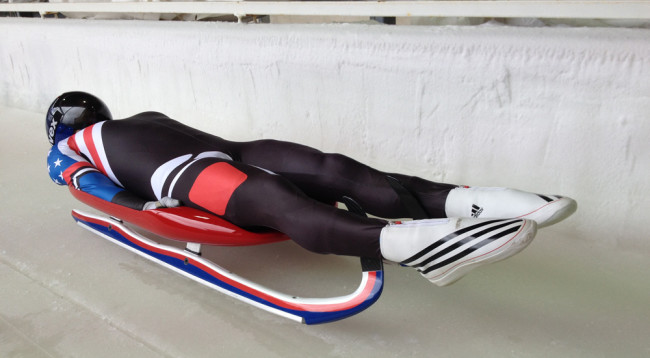 Courtesy Dow ChemicalMaterial Boost for the Luge Sled When luge racers pilot down a track of slick ice with nothing but their thighs, stability is crucial. That’s why the U.S. luge racing team approached Dow Chemical to help re-engineer their sleds. The sleds were made faster and more durable with high-tech materials and thorough testing. Dow replaced the sled’s longstanding fiberglass and wooden materials with automotive-quality carbon fiber, then redistributed the sled’s weight so that the curved steels, or bows, contact the ice with minimal vibration and optimal speed. The redistributed weight makes for a shock-absorbent sled that gives athletes greater control—and speed—on the ice, according to Jay Tudor, a research scientist for Dow’s research and development team. But the largest improvement, Tudor says, is the new shape of sled’s runners, which play a vital part in the sled’s speed, maneuverability, and ability to absorb shock. The new runner shape means racers not only have a smoother ride, but greater control over the skis, called kuffens, that carry them across the track. That control was put to the test through a series of wind tunnel trials at research institutes, including Clarkson University, that identified how sled design affected air flow patterns. When the athletes are more comfortable both physically and mentally in their sleds, Tudor says, it helps them focus less on finding stability and more on crossing the finish line as quickly as possible.

Courtesy OmegaBobsled Data Mining When a bobsled zips down a track at 90 miles per hour, it’s difficult to pick apart the finer details until after the run is already over. Since timers are usually only available at the starting and finishing lines, there’s always a delay in relaying performance information to officials and viewers. But with tracking upgrades from watch-making company Omega, that data is now instantly available from sensors installed right on the bobsleds. “We needed something that addressed the statistics on the track, so people knew what was going on,” said Omega’s Managing Partner Peter Hürzeler.”It makes the races much more interesting when you can see the information right in front of you.” These devices, which include a 3-D gyro sensor, a speed sensor, and a 3-D acceleration sensor, feed information through the sled’s wireless transmitter to provide detailed feed of the run. Every bit of performance information, such as the sled’s rates of acceleration and deceleration, aggregate speed, and angular velocity (the sled’s speed while in rotation) will be available in real time, making everyone an overnight expert in the finer points of bobsled racing. And even the experts have something to gain: The data recorded from the sensors can help bobsled teams find ways to improve their next run.