Cryptocurrency Mining Is Hampering the Search for E.T. 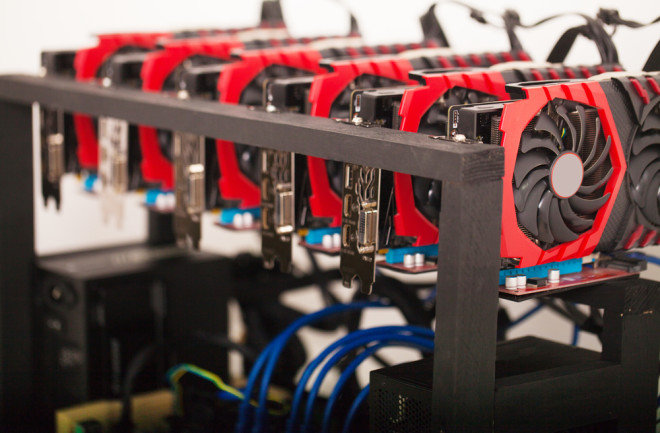 GPUs on a cryptocurrency mining rig. (Credit: Shutterstock) Mining for cryptocurrencies isn’t just gobbling up capacity on electrical grids around the world, it might also be slowing the search for extraterrestrial life. Mining cryptos like Bitcoin require miners to solve wickedly complex mathematical puzzles to validate each transaction. For their efforts, miners receive a small payment for each puzzle they solve, but the process requires a crapload of computing power. To reap profits, miners rely on graphics processing units (GPUs) that are high-performance computer chips that were first used to power video games. Miners have found success stringing thousands of these things together to maximize their ability to solve puzzles and make profits. This seemingly insatiable hunger for computing muscle is why crypto miners are now crossing paths with E.T. hunters, according to a report from the BBC. At Seti, radio astronomers want to process as many frequency channels as possible, because we can’t know which ones a distant civilization might use to send a signal to other worlds. That means there’s a ton of data streaming in from large arrays. Dan Werthimer, chief scientist at the Berkley Seti Research Center, told theBBC they deploy roughly 100 GPUs to analyze data from various listening arrays. Unfortunately for them, there’s a shortage of GPUs as demand has soared. “We'd like to use the latest GPUs [graphics processing units]... and we can't get 'em," Werthimer told the BBC. “That's limiting our search for extra-terrestrials, to try to answer the question, ‘Are we alone? Is there anybody out there?’” And Werthimer isn’t alone. Other radio astronomers are also finding it difficult to weather the GPU shortage and the rising costs that come with scarcity. For more on how the GPU shortage is affecting astronomy research, check out the rest of the story from the BBC’s tech reporter, Chris Baraniuk. (h/t BBC)