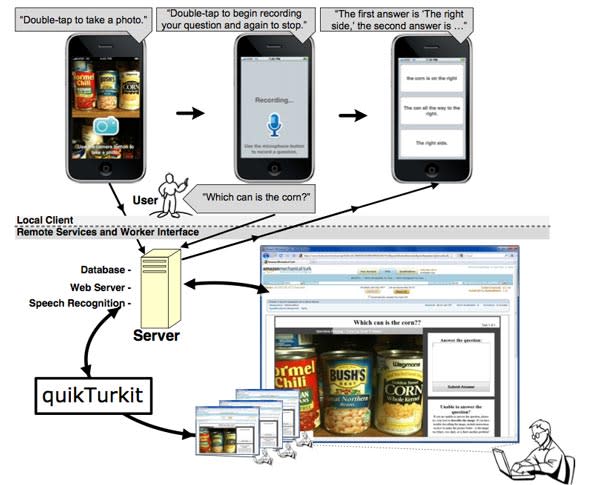 With VizWiz, the blind can take a picture, ask a question, and get an answer back from a real person in seconds.

What’s the News: With the web as their eyes, the blind will able to read menus, identify canned foods, and tell whether that park has any free benches without having to walk over. That’s the vision of a team of computer scientists

behind an iPhone app called VizWiz

, which lets people take a photo of whatever’s perplexing them, record a question like “What denomination is this bill?” and send it off to real people online who’ll respond in a matter of seconds with “That’s a 20.” How the Heck:

The Future Holds: VizWiz, which is being tested by teams of blind volunteers, hasn’t left the lab yet. But the volunteers are fans: it would be “very useful,” one said (via New Scientist

), “because I get so frustrated when I need sighted help and no one is there.” Though an in-depth study

[pdf] on VizWiz was released last year, there's no word yet from the scientists on when this will hit the market. Soon, one hopes. (via New Scientist